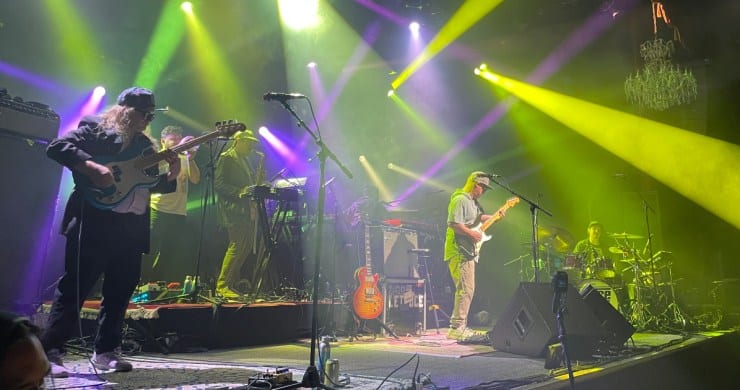 Surfing a wave of sold-out shows in the last month of this dizzying year, future-funk sorcerers Lettuce barreled into the the final frontier on the white-hot West Coast leg of their Bring Back the Love Tour 2021. The band was lookin’ live on arrival in the region, where they dropped a pair of scorchers last week at longtime Lettuce haunts in Lake Tahoe (12/9) and San Francisco (12/10).

On a December Thursday night in blustery North Lake Tahoe, LETT arrived to another sold-out affair at the trusty ol’ Crystal Bay Club, a cramped nightspot nestled inside a dilapidated, old-school casino of the same name. The small-ish room was packed to the gills, loud as f*ck, and hoppin’ from jumpstreet, and Lettuce did not let off the gas pedal for either of the blistering, one-hour sets.

A boisterous, if somewhat truncated set one also included Nigel Hall‘s “Don’t Change for Me”, from his 2015 solo debut, Ladies & Gentleman…, again detonated with the customary “Message From The Meters” stuffed inside. “Yakatori” was among  other juicy jams peppered throughout the power hour. The first frame whipped into a frenzied crescendo with the once-shelved mashup of WAR’s “Slippin’ Into Darkness” blended with BT Express’ “Do It Til You’re Satisfied”, with a cheeky nod to Erykah Badu’s “Back In tha Day”, just because they could.

The second set at Crystal Bay was nothing if not a whirlwind. 2008’s “Sam Huff’s Flyin’ Ragin’ Machine” popped the bottle and gave way to a behemoth, complete run through “Trillogy” from 2015’s Crush. The latter’s future-bass-meets-G-Funk-on-lean sound started subaqueous, bubbled up, and spilled out into a maniacal drum n’ bass section that threatened to careen off the rails, before eventually arriving at “Chief”. Guitarist extraordinaire Adam “Shmeeans” Smirnoff took control of this crunchy number, dazzling stunned onlookers with searing Fender Stratocaster shred. The natives called him SMZA-rector, because he came to wake the dead.

The sublime “Silence is Golden”, from 2020’s Resonate, saw Zoidis go full warrior-spiritual and take a clean tenor sax solo that soared above the clouds. The band somehow deftly landed in a few measures of The GAP Band’s timeless “Outstanding”, much to the delight of the sea of dancers, before the bombastic “Silence” outro jam sledgehammered the crunk into our frontal lobes. “Relax” featured a stunning solo from Erick “Jesus” Coomes, who bombed atomically with nimble fretwork and warm bass guitar tones. A raucous run through Rick James’ “Mary Jane” was the perfect encore for the perpetually-blazed Tahoe massive, and a righteous sendoff to a somewhat-short but certainly-satisfying Lettuce show.

The following evening, three-and-a-half hours southwest of Crystal Bay Club, Lettuce rumbled into the historic The Fillmore in San Francisco, a celestial rock hall they’ve blessed a handful of times over the years, though it had been several since they had last commandeered the place.

During the drive down from the Sierra Nevada mountains, we got word of the tragic passing of a local legend and shooting star, electronic producer CharlestheFirst, a prodigal son of Truckee, CA, just outside of Tahoe. So, on a personal note, we entered the evening carrying a hefty amount of shock and grief, thoughts, and emotions that tempered our enthusiasm a bit as we waited in a lengthy line outside the Fillmore, venue staff meticulously checking vaccine cards two at a time.

As has become the norm for LETT on the West Coast, this was once again a sold-out engagement with little standing room to spare all the way to the back hallway. The group took the stage just before 8:30pm and launched into “The Force” from 2015’s Crush, furious focus took hold of the squad, one that would last for the entire two sets. Lighting Designer Rob Burns was on point early and often, making good use of the legendary Fillmore chandeliers, employing a less-is-more approach with an assortment of color and shadows, silhouettes and space.

A lusty instrumental romp through A Tribe Called Quest’s “Luck of Lucien” delivered; as did a feverish “Royal Highness” that saw Shmeeans direct into a lengthy strut through Graham Central Station’s “The Jam”, before returning to finish “Highness” with authority. Veterans, these cats have got the game spiced like ham.

Scorpion’s subtle additions could be heard throughout the shows, especially when dubbing-out the band in real-time from behind the Fillmore’s humongous analog mixing board. His tasteful contributions were noticeable only in just the right spots, and in appropriate yardie style. A crucial new addition to the tech team, Scorpion connects with Zoidis on the Korg X-911 synth, Jesus Coomes’ low-end theories, and Deitch’s island riddims. Scorpion is also responsible for the deep dub cuts heard banging over the PA pre/post-show and during set-breaks, steadily forwarding tasty appetizers and vibe stabilizers to pair with the live LETT experience.

Keyboardist/vocalist Nigel Hall got real pretty and personal with a rare stand-alone reading of “Happy Feelings” by Frankie Beverley and Maze. Hall mentioned how the band was keen to pay tribute to Bay Area funk and soul icons who had inspired them, and that intention would reveal itself throughout the concert in ways both subtle and less so. A methodical gallop through the beloved “Madison Square” saw the entire ensemble once again moving as a unit, pulling out all their steez and the stops, unleashing an incandescent take on their classic jam from 2012’s Fly.

Set two in San Fran was predictably a doozy, setting it off with a patient, pompous “Monorail 3000 > Blast Off” combo that brought ‘nuff bounce-to-the-ounce, it would have made Roger Troutman proud. In another gracious nod to the hometown heroes, Lettuce’s own “Last Suppit” began with a page torn from Tower of Power’s seminal “Oakland Stroke”.

This show’s type-II improvisational apex was the crunkalogic “Purple Cabbage”, another LETT chapter from the holy book of Dilla. Tonight the violet vegetation unspooled into harrowing, mystical spells, a throbbing, kaleidoscopic joyride quite comfortably at home in the Bay Area’s psychedelic bosom. To smudge the vibe just a smidge, Nigel Hall’s red-hot vocal on Cold Blood’s “Ready to Live” offered a reverent homage to East Bay vocalist Lydia Pense.

When it comes to Lettuce in 2021, the final quarter of the Fillmore show was as good as it gets. “Trapezoid” proved diabolical, a spine-chilling trap thunderclap of preposterous proportions. Jesus and Deitch swung slow and low with a demonstrative tempo, Zoidis’ synth shifted into mycelial gear, the band beckoning the heart of darkness, before Bloom took off skyward, leaving a trail of fire behind him with the squadron hot on his tail.

Voltron then segued into the frenetic four-on-the-floor of “House of LETT”, slightly-adulterated by the crossover “Trapezoid” DNA. The band somehow negotiated through a pristine jazzy space, only to drop into the familiar “Superstar Pt.0” by K-OS and swerve back into a leviathan “Trapezoid” reprise that threatened the structural foundation of this archaic hall of rock n’ roll.

With the building holding on for dear life, you’d think the boys might play it a little safe, then pack it up and head south to L.A. Nope! More merciless funk was on the way for an extended encore, beginning with “LETT It GoGo”, the group’s nod to the District of Columbia, Chuck Brown, Trouble Funk, and liberal employment of cowbells, finger-snaps n’ handclaps. Collars popped, twerkers twerked, and all was right in the Fillmore, in spite of the pandemonium running wild. LETT eventually landed in a buoyant bounce that rather seamlessly transformed into Grover Washington Jr.’s “Mister Magic”. With Shmeeans dialing in that effervescent quiet-storm guitar riff, Zoidis blowing smooth tenor, and Hall sliding in with the sultry Rhodes, Lettuce turned back the clock over three decades on this Illadelph groove-jazz chestnut, if only for a few precious minutes.

To bring it on home in this historic house and hood, Lettuce unveiled a gripping take on Tears For Fears’ “Everybody Wants to Rule the World”, a pop song Deitch and Hall reimagined in almost Soulquarian-style over a dozen years ago, and later laid down on Elevate, making it their own to immaculate effect. Lately, the group has regularly detoured “Rule the World” into a “Butcher Brown” remix, a riff and pocket similarly drenched in the waters of the James River, and on this night it would be no different. Well, maybe just a little bit…

Once through the traditional verse/chorus and Lettuce diverted towards the remix flavor, the salacious energy was almost too much to bear as Bloom told yet another tremendous tale on the trumpet and the band locked into the voluminous pocket. Towards the end of the song, as Nigel began to introduce the band members, Jesus Coomes organically morphed the bassline into the unrepentant afrodesia of D’Angelo’s 1995 panty-dropper “Lady”. Deitch caught it on the fly, and everyone else picked it up on the one. While each player took their moment humbly basking in the spotlight, the band volleyed the “Lady” turnaround time and again, each pass to louder squeals from some folks screaming in the front rows. An appropriately orgasmic finale for a pair of Lettucefunk heaters, sending us levitating into the night, to beckon the coming long, cold winter.

A tale of two cities. Four sets, all killer, no filler.

Funk Heals. Give Thanks for Lettuce.

Lettuce finished up the West Coast leg of their triumphant Bring Back the Love Tour over the following two nights, 12/11 at the Teragram Ballroom in Los Angeles and 12/12 at The Observatory in San Diego. The group will headline Denver’s Mission Ballroom on December 18th before heading to St. Petersburg, Florida on 12/30, then onto Miami Beach to wrap up 2021 and kick off 2022 with a two-nighter on 12/31, and 1/1. For tickets and more information, head here. 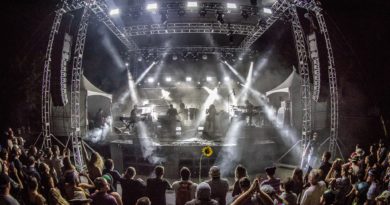 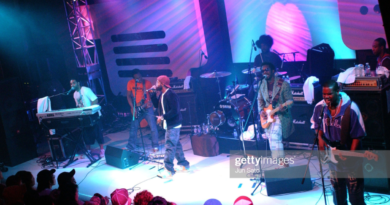