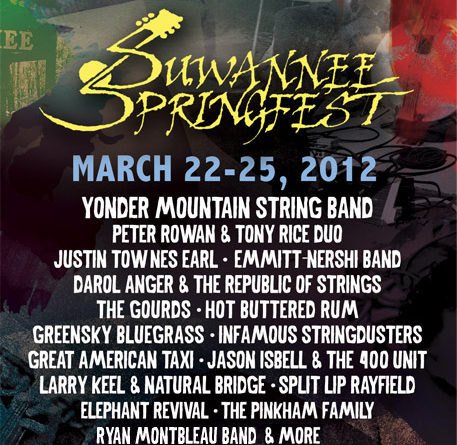 One could argue that the Spirit of Suwannee is the best venue for a music festival in the country. It boasts the last hoo-rah of festival season, Bear Creek, as well as Spring Fest – which kicked off this year’s festival season in proper fashion. Personal note: I must admit, I have never in my life been so overwhelmed at this park. Faced with decisions of what band to see and what band to miss, nearly all bands embodying the rare and special quality of being unafraid to share the depths of their human experience. I know i missed sets i should not have missed, but on the other hand I found myself being unexpectedly blown away. This review is merely one man’s experience of Spring Fest.

On Thursday evening, Big Cosmo paid tribute to New Orleans with 2nd line type bluegrass and a song about being drunk in the Music Hall. The Music Hall is a fantastic room with places to sit, a full liquor bar, and in the morning it hosts a buffet breakfast that some say is better than the Bellagio.
There are moments in life that bring those involved to a state of presence – where all of the mind’s endless thoughts and dramas cease to give way only to the moment – moments like these are why we spend time and money to attend music festivals.

The first of Springfest’s many such moments like this occurred Thursday night on the Porch stage. Elephant Revival had just finished their set of eclectic musical treats. Paul Levine, Festival Curator/Director, came on stage to dedicate the encore for the late Michigan Mike. Bonnie Paine’s hauntingly captivating voice begins the a cappella homage, “If i was a raven / I’d fly out to the heavens / I’d fly to all my loved ones / If i was a raven”. The rest of the band joins in with mystical harmonies, “Some say on a mountain there is many a raven / They call out to the living from somewhere far beyond them / From those we’ve loved that have flown on …From those we’ve loved that have flown on”. After the last note, a brief moment of silence hung in the air for a lifetime before the blessed audience wiped eyes and praised.

Ryan Montbleau Band’s set was highlighted with a high spirited “The Loved Each Other” while the Short Straw Pickers kept the bluegrass faithful stomping late into the night with a little help on fiddle from Lindsey Pruitt, who gave a hands-on workshop about her instrument early Friday morning.
Friday showcased “The Songwriters Set”, featuring three of the most talented songwriters at SpringFest: Jim lauderdale, Justin Townes Earle, & Jason Isbell – who performed a beautiful “Alabama Pines” before a spring shower rolled in and moved the unprepared into the music hall where Grandpa’s Cough Medicine raised hell. Though folks were sheltered from the rain, there was no taking cover from the bombastic banjo combustions of Mike Coker or the fiercely true and unafraid confessions of Brett Bass who sings about not having enough money to drink, wanting to exact a violent revenge for a friend, and societal observations, “I don’t know the word Oppression / But I know I ain’t free”. All the while being held down by the unshakable rhythm of Jon Murphy’s bass. They were enhanced later in the set by the washboard stylings of Wild Man Steve. Under blue sky, Mickey Abraham and The Acoustic Ensemble performed a moving rendition of John Prine’s “Angel from Montgomery” on the Campground stage.

Back inside, the acoustic musical trio of Asheville lumaniries, Red June, graced the stage with their natural demeanor and angelic harmonies. The single vocal microphone they situated around might as well have been a campfire as they performed with such grace and a true reverence for those who chose to spend some time with them. Will Straughan, formally of the Emma Gibbs Band, possesses a fearless, lonesome, and loving voice. His guitar sets the backdrop for his poetic self assessment, as he stares at his toes. Gently he sang, “I’ve been places i ain’t proud of / But i’ve allowed love to prove itself in joy and pain / And I feel, feel the suffering is real / When my head ain’t in the game” while Natalya Weinstein’s heart poured out as the sound of a bow across a fiddle. John Cloyd Miller’s voice is timeless, and when flanked by his harmonious wife to one side and his close friend to the other, the three voices become one holy melodious miracle of the moment when they sing together. This becomes most evident with their a cappella cover of Ralph Stanley’s “I’m Willing To Try” – appearing on Red June’s new album, “Beauty Will Come” which releases on June 5th.

Later in the evening, Greensky Bluegrass, shared their versions of “Atlantic City” by Bruce Springsteen and Duran Duran’s “Hungry Like The Wolf” while Tornado Rider put on his show in the Meadow and Florida’s own Saltwater Grass funk’d up the Music Hall.

Saturday morning was a wet one as lightning, thunder, and rain performed for the Suwannee until early afternoon. Braving the storm, Whetherman, the musical creation of singer/songwriter/poet/all-around-great-guy Nicholas Williams, performed on the Porch stage. Whetherman’s backing band, The Steady Melodies, create a tapestry of sound for Nicholas Williams to lyrically paint on. On a day of storms, and rambunctious bluegrass, this was a very welcome treat. The Lovell Sisters’ new band, Larkin Poe, performed afterwords in the Amphitheatre. Saltwater Grass annihilated the Campground stage with murky grooves, horn lines from hell, and Ryan Daley’s guitar weilded a monster tone; the meanest and cleanest guitar heard all weekend. Rachel Murray joined the band to share vocal duties on a cover of The Devil Makes Three’s “Old Number 7”.

Infamous Stringdusters kicked off the peak of the weekend, with a soul stirring rendition of “He’s Gone”. The Stringdusters could very well be the best thing happening in the bluegrass world right now. They feed off of each other, the center of focus constantly changes; everybody is bouncing around and then settles in when the pedal is pushed to the floor. It is common to see children at SpringFest, but it is rare that any of the musical acts truly captivate them. Rushad Eggleston, aka Tornado Rider performed Saturday night to a crowd eager to be entertained, and the first few rows were all children passionately adoring the spandex-clad virtuoso. Tornado Rider transformed the meadow into his world of goblins, fortresses, falcons, and languages that don’t exist. The set culminated in him riding around on a security guard’s shoulders before hanging out with kids and spending as much time as necessary to provide an autograph to everyone who wanted one. (Peter Pan) Hats off to Mr. Jennings!

Suwannee SpringFest 2012 headliners Yonder Mountain String Band, were joined by Darol Anger on fiddle, put on an old fashioned barn burner. After a set of original music, highlighted by a tribute to Bennie Galloway with bassist Ben Kauffman singing familiar words, yet feeling this truth for the first time; he sang with his 7 week old newborn in mind. After a set break, Jeff Austin announced it was time for a pick – inviting countess guests on stage running through everything from a Talking Heads cover to impromptu sings longs “Way up upon the Suwannee River!..”. After the dust settled, the bluegrass faithful were entertained by Emmit – Nershi Band who played from their own catalog as well as touching on a song or two from String Cheese Incident while others enjoyed the jamband stalwarts Tea Leaf Green and Florida native Dread Clampitt brought it down in the music hall.
Sunday, also known as “Vassar Clements Day”, acted as a collective exhale from the hectic and overwhelmingly fun weekend. Guy Clark flexed his songwriting muscle and happily took requests from the audience for songs like as “Hemmingway’s Whiskey”. Tony Rice was due to perform with the Infamous Stringdusters but he fell and injured himself a day before SpringFest and was unable to attend (we are all hoping for a speedy recovery). Donna The Buffalo is a Spirit of Suwannee staple, so fittingly they closed the festival and sent all the happy campers home. All the pickin’, swamp-boogie, bluegrass, poetic justice, jazzy folk and country punk, the supernatural scenery at Spirit of Suwannee Music Park, and the inherent great vibrations of the returning festival-goers, it once again added up to an experience that remains the spice of life!