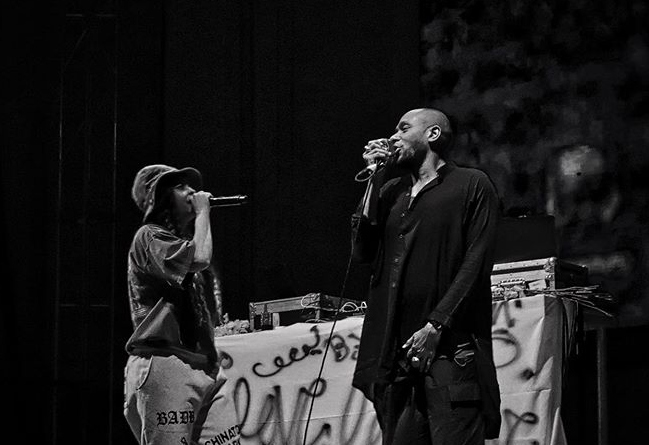 Features
November 6, 2019November 6, 2019 B.Getz badu, black on both sides, Cleon Edwards, Erykah Badu, greek theatre, hip hop, mos def, RC and the Gritz, slick rick, souls of mischief, yasiin bey
Back in the late ’90s, the rapper Mos Def used to refer to himself as the “Universal Magnetic.” One could go as far as to call him enigmatic, as there are very few emcees that carry such a mystical aura. There is a certain carefree spirit and energy that surrounds the artist who now goes by the name Yasiin Bey. Dating back to his time in owning Nkiru Books in Brooklyn alongside Talib Kweli, to the duo performing as Black Star, to his star turn atop the Rawkus Records roster with a pair of high-profile solo albums, the Mighty Mos Def has always been regarded as a top-tier lyricist with a conscience and righteous purpose on the mic. But his output the past fifteen years has been sporadic, and 2009’s The Ecstatic notwithstanding, Mos/Bey’s material has sounded lethargic at best.

On the heels of some unpredictable behavior—including moving to Cape Town, South Africa in 2013, then being (temporarily) denied international travel on a world passport—he later announced his retirement from music with the peculiar (and somewhat uninspired) December 99th album in 2016. He re-emerged soon thereafter, doing shows under his new moniker, Yasiin Bey. Even to his most ardent supporters, it was unclear what lay ahead for the rapper/singer/actor/activist.

Lucky for fans in the Bay Area, on Friday, October 25th, the artist formerly known as Mos Def wanted to properly celebrate the 20th Anniversary of his landmark solo debut LP, Black on Both Sides. He booked the majestic Greek Theatre in Berkeley, CA, and dialed up a who’s who of his late ’90s glory days circle to open the show, including a full set from Erykah Badu plus Bay Area-beloved blazers Souls of Mischief and the always animated Busta Rhymes. Mos even reached all the way back to the golden era ’80s for an undeniable legend, “The Ruler” himself, Slick Rick.

After a warm-up set from DJ Von, local heroes Souls of Mischief kicked things off with a bevy of their most beloved songs, including the timeless “93 ‘til Infinity”. Slick Rick followed and did more of the same, including the iconic “Children’s Story”, “La Di Da Di”, and “Hey Young World”. Busta Rhymes stormed the stage with the omnipresent hypeman Spliff Star, but their sound was drowning in bass and reverb so it was difficult to make out what was what up there. These hip-hop stalwarts did their best to set the table for the queen, the healer, Fat Belly Bella herself, Ms. Erykah Badu.

This was Badu’s fourth time playing the Bay Area over the past couple of years. Her setlist was quite similar and fairly abbreviated in the support slot, but she did well to warm things up. First, her band got cookin’, the always-sturdy RC & the Gritz laying down the grooves with extraordinary drummer Cleon Edwards setting the tone from jumpstreet with just the right blend of hip hop, throwback funk, and Baptist church styles.

The group began with “Caint Use My Phone” and “Hello Hello”, as Badu segued in and out of many of her most beloved songs. “On and On” blended into Yarborough and Peoples “Don’t Stop the Music”, “Love of My Life” mixed in some A Tribe Called Quest, she did “Other Side of the Game”,a bit of “Bag Lady”, “Danger” and “Window Seat”. Badu reprised her rendition of Snoop Doggy Dogg’s “It Ain’t No Fun (If The Homies Can’t Have None), among other abbreviated cuts.

Erykah spent some time toward the end of her set reflecting on some fond memories recording in the studio next door to where Mos and Talib Kweli were lacing up the classic Mos Def & Talib Kweli Are Black Star. Finally, they cut her sound during “Tyrone” because she’d gone way over the allotted time for her opening set. It was hard to see her go after just seventy minutes, but the empress revealed merely a sliver of her true magic, as Badu knew it was Mos Def’s night and therefore didn’t wanna show out or steal the show.

After the changeover, Yasiin Bey took the stage in front of DJ Von, and the emcee transmitted his sounds old-school—with two turntables, mixer, and a microphone. Beginning with the iconic “Hip Hop”, the man they used to call the Mighty Mos Def tore through the timeless album, focusing on community togetherness on “Love”, the dangers of the flex on “Got”, life in the fast lane on “Speed Law”, the global water shortage on “New World Water”, and the reality of Black social mobility on “Mr. N*gg*”. It was clear to anyone paying attention to the lyrics that the issues and commentary this artist found pertinent in 1999 could only be viewed as further exacerbated in 2019. As such, the intention inherent within this exemplary slab of art remains potent and valid, as the album stands the proverbial test of time.

Bey really set the whole joint ablaze on “Brooklyn”, where he so memorably interpolated Red Hot Chili Peppers “Under the Bridge” before dropping what might be his finest verse of all time atop Biggie Smalls’ harrowing “Who Shot Ya?” beat from back in 1995. In spite of performance rust and his disillusionment with both rap and the music industry at large, when Mos Def wants to kick a rhyme, there are very few emcees who can match his flow, messaging, and panache in delivery. On several occasions on this evening, the rapper was able to access that flow state that allows him to spit with such effortless style.

To bring it on home, Yasiin Bey welcomed old friend Erykah Badu to the stage so she could sing the hook on Mos’ irresistible ode to dancehall queens, “Ms. Fat Booty”, before taking a detour away from Black on Both Sides and jumping into “Roses”, a collaboration between Mos Def and singer Georgia Anne Muldrow. The moment many were waiting for finally arrived when Bey invited Slick Rick out for the mouth-watering “Auditorium”, a classic collab with “The Ruler” found on Mos’s The Ecstatic that is beloved from coast to coast.

Unfortunately, Greek Theatre’s notorious 11 p.m. noise curfew saw to it that Yaasin Bey was cut off while performing the emotional “Umi Says”, an anti-climatic ending to a wonderful evening with some of the finest and most profound artists in all of Black music over the last two decades. But moments later, as the house lights went up, Yaasin Bey knelt at the edge of the stage, arms brimming with long stem roses, his smile as wide as the sky.