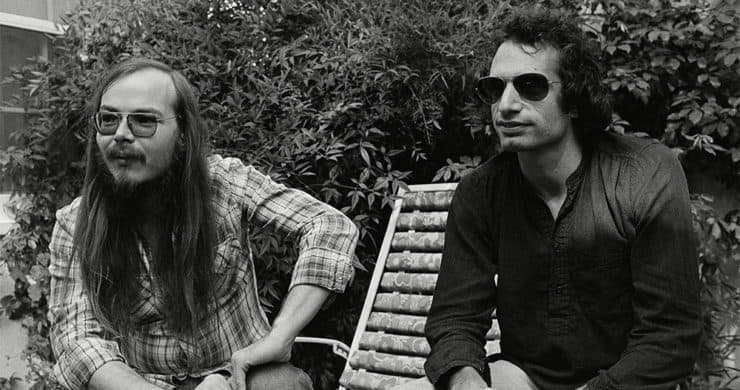 Steely Dan is a cerebral amalgam of rock and jazz—some of the most literate and intellectual commercial pop music ever created. By incorporating elements of soul, dixieland, funk, country, and beyond, Steely Dan always showed an uncanny ability to take their music and go deep. Their catalog runs the gamut in styles, players, stories, and vibe like few other artists of their day. In 2018, their legacy and legend remains intact; their venerable live show continues to astound audiences around the world, mining the band’s unparalleled forays into the fusion of classic jazz and contemporary rock.

The core band was essentially comprised of a duo, keyboardist/vocalist Donald Fagen and guitarist Walter Becker; the pair were the unlikeliest of rock stars in the ’70s. The two principle songwriters poured their entire lives into meticulously crafting masterful albums, with a laser focus on the middle part of that decade, manifesting the classic four record run of Countdown to Ecstacy, Katy Lied, The Royal Scam, and Aja. During their commercial heyday, the band refused to tour, instead focusing on perfecting their studio output; these profound aforementioned releases lend credence to that unconventional decision.

Steely Dan initially disbanded in 1981, with Fagan moving on to some critically acclaimed solo releases. When the band reunited in 1993 with initially (wait-for-it) a live album, they took an entirely different and unexpected career path. Fagen and Becker recruited a phenomenal crack-band and set out with a jamband-like road-warrior concert schedule, interspersed with a couple of new studio albums. The Dan always marched to the beat of their own drummers.

Sadly, Walter Becker passed away in 2017 after a protracted illness, and with that news came a renewed interest in his and Fagen’s timeless songbook. Not only are Fagen’s thrilling live shows still extremely well-attended and financially viable, but Steely Dan’s fiercely independent, satirical, rebellious streak can be found alive and well inside their prodigious recorded output, amid the steady stream of monster studio cats they employed to effectively transmit their unique craft.

To create a complete list of Steely Dan deep cuts would be an exercise in futility, as there are countless incredible songs of all kinds, styles and colors that litter their nine studio records. So in anticipation of the tribute set later this month at Brooklyn Comes Alive, we’ve compiled a selection of five essential deep cuts from Steely Dan’s most prolific era: the mid-1970s.

As the first single from 1973’s sophomore album Countdown to Ecstasy, “Show Biz Kids” is not exactly a deep cut by definition, yet it’s not among their best known songs. With the rocker, Steely Dan contrasts the lives of the “Haves” and the “Have-Nots” in America in an atypically sarcastic approach. “The poor people,” as described to us by Hollywood elitists and showbiz types, are actually our everyday salt-of-the-earth folk who work blue-collar gigs for a living to support their families. Once again, Steely Dan is a pioneer in that particular socio-cultural commentary.

On this track, Donald Fagen and Walter Becker deliberately delivered a veiled diss to ABC Records and anybody who expected more songs in the classic-rock vein of their earlier material. Although the song features a phenomenal slide solo from guest axe-slinger Rick Derringer and a funky-ass piano groove, “Show Biz Kids” is structured rather strangely, eschewing a bridge and focused on a driving, relentless jam session that suits the dark-themed lyrics about the hedonism of the day. The Dan pokes a little silly at themselves with a cringey nod to “Steely Dan T-Shirts”. The reference to the “Washington Zoo” is likely a nod to the bubbling political swamp in the District.

“Your Gold Teeth II”, a fantastic voyage found on Katy Lied, was the most sophisticated song Steely Dan had attempted up to this point—a harbinger of the approach they crystallized later on with Aja. Some complexity comes from the rhythms: the base time signature is a 3/4 waltz, but there are bars in 3/8, 6/8, and 9/8.  The chorus is drenched in countrified harmony, peculiar for a jazz-rock tune, yet it works absolute wonders. There is no other song in the Steely Dan catalogue that mirrors “Your Gold Teeth II”; not even its precursor would betray the magic of what was forthcoming.

The song features exemplary performances from drummer Jeff Porcaro and guitarist Denny Dias. Porcaro had to power the shifting rhythms, but still gives it that just-right feel. On Fagen’s request, he studied a Charles Mingus record with drummer Dannie Richmond on it to get the particular drumming style Don was seeking. Dias was masterful on this particular guitar solo; though he often lived in the shadow of Steely’s regular ace Jeff “Skunk” Baxter, Denny was the guy Becker and Fagan went to for the liquid-jazz phrasings and dreamy patterns over intricate chord and rhythmic changes. If I could hear Phish cover one Steely Dan song, this would be it.

“The Royal Scam” represents the Dan’s powerful New York mythology and was the title track of a record that kind of put a cap on a particular era and sound from the band. Lyrically a departure, the content is based on an entirely different subset of American life than they’d previously explored—a narrative about Puerto Rican immigrants straight from the city of St. John (San Juan) coming to New York City, enticed by the dream of a prosperous life rich with opportunity and freedom. As one interpretation suggests, the protagonists realize their sad wings of destiny and wind up trapped in a ghetto and driven to addiction. “By the blackened wall, he does it all,” sings Fagan. The scam betrays the immigrant dream; the crime here is not literal, but metaphorically implied.

“The Royal Scam” is full of Fagen’s minor chords, augmented by the harrowing tones of guitarist Larry Carlton, Bernard Purdie’s warm, lyrical drumming, and the grandiose backing vocals from Venetta Fields and Clydie King. Sewing together the plot, the dueling muted trumpets from Chuck Findley and Bob Findley lace the song with their subtle, sympathetic tones. These musical elements give “The Royal Scam” an emotional quotient that makes it somewhat of an anomaly in the Steely Dan catalog.

A “Black Cow” can be a root-beer float or a candy-like beverage. In the Steely Dan song of the same name, the protagonist is informing the lady that he is through being friend-zoned, when every time one of her relationships with an unsuitable suitor goes awry, she comes running back to him. In the context of a cocktail, a “black cow” is considered a juvenile and silly drink. “Black Cow” gets underway slow-paced and deliberate, a fatback groove with a huge pocket and Yacht Rock vibes  The narrator’s disgust at his part-time lover’s “outrageous” behaviors are part of a macro-theme that runs with calculated subtlety and increasing regularity on several Steely Dan records: a Western/American society that’s spiraling deep into a darkened abyss of degenerate sleaze.

More specifically, the intention beneath “Black Cow” is almost a hip-hop style reporting, in that they are making art detailing what they’ve observed from their Southern California surroundings. At the time of “Black Cow” appearing on the meticulous studio masterpiece Aja, Steely Dan’s Becker and Fagen had been headquartered in the Los Angeles area for about five years. The song was later re-purposed in the New York rap universe when it was lifted for the timeless late-’90s Harlem anthem “Deja Vu (Uptown Baby)” by Lord Tariq and Peter Gunz. The band was apparently swayed by an appeal directly from the rappers, in the form of a written request letter—the note begged Becker and Fagen to let this hip-hop duo flip “Black Cow” on its head. It worked well for the Dan, as their music and swagger was injected back into the cultural zeitgeist, two full decades since the duo last mattered on any pop charts.

Situated after “Peg” and a couple of songs before the massive funk of “Josie” on side two of the pristine Aja, “Home At Last” can be easily overlooked yet ranks as one of Steely Dan’s finest ballads. The song offers the blues, at least in the Steely Dan sense of blues, which by this time had evolved into yet another thread sewn into their intricate afghan of harmony and melodies. Similarly, one can forget that it’s a blues song at all, one apparently inspired by Homer’s Odyssey, where Ulysses attempts to sail home safely after waging battle. This is thought to be a not-so-thinly-veiled metaphor for Walter Becker and Donald Fagen pining away for their native New York from way across the country in Southern California. The Duke Ellington-centric horns offer a sophistication that evens out the screaming guitar from Chicago jazz-wizard Larry Carlton. It’s no secret that this track is a signature song for Bernard Purdie’s “Purdie Shuffle,” injecting a robust undercurrent of funk on an otherwise melancholy tune.