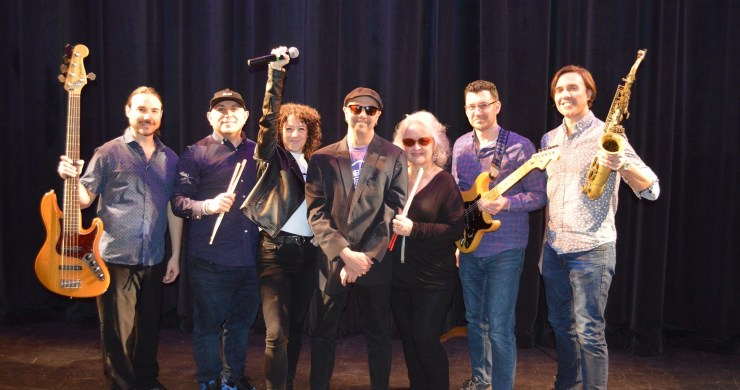 Packed with an abundance of uplifting soul, funky grooves, and another batch of vibrant tunes, Bobby Deitch Band is back with Work With Whatcha Got!, the group’s second full-length album. Brimming with Bobby Deitch’s trademark New York vibe, the record reveals a collection of tracks more colorful and evolved than its predecessor, 2017’s Grateful. Employing an ever-phenomenal band of area musicians—including wife Denise Deitch—alongside another all-star roster of funksters from across the land, Bobby Deitch serves up another delicious hot plate of his finest delectable offerings on Work With Whatcha Got!.

Clocking in at nine robust tunes, Work With Whatcha Got! is full of catchy choruses, positive messaging, and intoxicating grooves. It leaps out of the gates with the scorching, poignant “Live Together”, and never lets up on the gas pedal the rest of the way. Immediately it’s clear that this effort is a step up; it’s bolder, brighter and juicier from the jump. “Live Together”, the third pre-release single, might be the hottest track on an album full of them.

“The song’s message is about trying to heal wounds created by racial prejudice and political divisiveness,” Bobby Deitch said. “I hope the vibe and groove of the music and the message of emotional healing reaches people to spread love and compassion for one another.”

Bobby’s wife Denise continues to be a major inspiration and contributor to many of their songs. A top-tier drummer herself, Denise Deitch writes, records and performs with Bobby Deitch Band, and is among the most popular members of the group. Denise will often assist Bobby in bringing the song ideas, turns of phrase, a melody, hook or harmony to fruition, be it while they are at the dinner table, a studio session, or even walking the dog.

The album’s title track is a fiery, high-octane stomper with choice horn blasts, heavy guitar riffage, and bright backing vocals. The song features Michelangelo Carubba (drums) and Shira Elias (vocals), both of Brooklyn-based showstoppers Turkuaz. Throughout Work With Whatcha Got!, Bobby subtly reveals a myriad of his different influences, including Stevie Wonder, Earth, Wind & Fire, and Billy Joel, and there’s always a slight aura of Steely Dan in the BDB mix. The title track is a wonderful example of Bobby’s heroes shining through the tunes.

“Constant Complainer” is the second single, and a vocal duet with legendary bassist of The Meters, George Porter Jr., who also appeared on BDB’s Grateful. The iconic New Orleans musician is a longtime friend of the Deitch family, and the seeds for this particular collab were sown a couple of years ago in Colorado, when Porter was at a festival gig, playing the same day as Bobby and Denise’s son Adam Deitch (Lettuce, Break Science). The Deitch’s and George decided on that day that another musical convergence was in order, and the fruits of that discussion are heard loud and proud on “Constant Complainer”. Porter’s contribution was tracked and engineered in NOLA, courtesy of Lettuce’s Nigel Hall.

“It feels like I’ve always known Bobby and Lady Denise,” Porter said. “My first reaction when I read the lyrics to “Constant Complainer” was ‘oh my, I have lived that song before.’

“If Looks Could Kill” boasts a blazing talkbox solo from Portland, OR-based Steveland Swatkins, a veteran of Allen Stone’s touring ensemble and funk encyclopedia in his own right. This cut is the low-key barn-burner on the album, all butterfly collars and bell-bottoms. Other highlights include the smooth, quiet-storm R&B of “You’re All That Matters to Me”, a lovely vocal duet with Denise, and a different brand of pure mid-70’s swagger.

Work With Whatcha Got! was tracked primarily at Call Hollow Studios in Pomona, NY, Les Paul Studio in Mahwah, NJ, and also Colorado Sound in Westminster, CO. Bobby Deitch Band multi-instrumentalist Matt Wayne stepped into the producer role alongside Bobby, and the duo worked diligently on the album for over two years. The sonic fidelity and resonance of the record are palpable upgrades from BDB’s previous release.

Dave Reiss, bassist and musical director of BDB, says that Bobby loves songwriting and arranging, delivering nuanced demos to the band with the songs in their earliest formations, and then encourages group collaboration as they flesh out the concepts together. Bobby welcomes the contributions of all of the players that make up the BDB, and then he incorporates those into the finished tracks. Reiss said of the album,

Bobby exhibited deep trust in his bandmates in workshopping these songs and creating this album together. We all felt comfortable to share our ideas. He was excited to investigate them and let the songs and performances go in whatever direction felt best. You can especially hear the synergy between Bobby and our sax/keys/vocalist Matt Wayne, who produced and recorded Work With Whatcha Got!. The record sounds like Bobby, but also sounds like Matt, and sounds like BDB.

In addition to Wayne, Reiss, Bobby and Denise, the current Bobby Deitch Band lineup includes drummer Joe “Mamma” Carpentieri, vocalist Natasha DiMarco, keyboardist Eddy Bishai, and guitarist Scott Reeves. This core group has been performing as an eight-piece for several years, and coalesces tremendously on this latest release. Special guests that slide through Work With Whatcha Got! include son Adam Deitch, as well as his Lettuce bandmates Nigel Hall (keys), Eric “Benny” Bloom (trumpet) and Adam “Shmeeans” Smirnoff (guitar), the latter of whom Bobby and Denise have known for thirty years. Other contributors include the aforementioned Porter, Elias and Carubba of Turkuaz, Swatkins, Original Blues Brothers saxophonist Baron Raymonde, vocalist Hayley Jane, and more.

“The message of the music found on Work With Whatcha Got! is meant to spread love,” Deitch said. “The music is designed to empower people to be the best they can be. It’s ‘feel good music’ that touches your soul.”

Stream Work With Whatcha Got! by Bobby Deitch Band below.