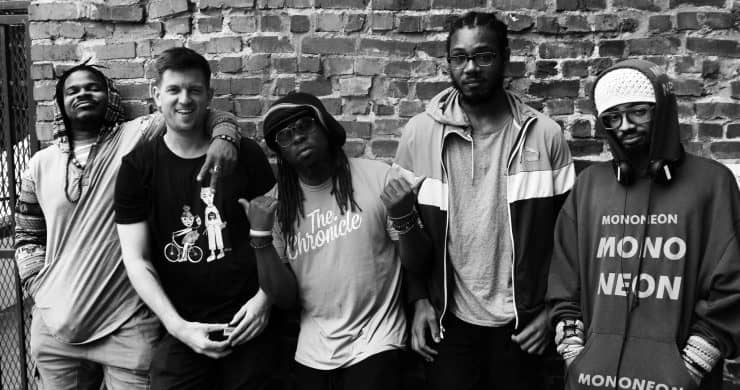 For Monday, December 30th’s late-night Ghost-Note & Friends Play Prince blowout, the outfit led by percussionists Nate Werth and Robert Sput Searight (Snarky Puppy) will welcome a gang of guests to dive deep into Prince’s timeless, seemingly-bottomless catalog of dance, music, sex, and romance til the wee hours in NYC [Get your tickets here].

Joining Ghost-Note will be D’Angelo and The Vanguard singers Rojo “REDD” Lavoe and Ahrel Lumzy as well as vocalist STOUT (Cory Henry/Childish Gambino). It’s clear as day that both Childish Gambino and D’angelo are tremendously influenced by Prince’s music and mojo. These accomplished vocalists will certainly arrive attuned to the vibe of the Purple One’s catalog, yet prepared to put their own unique, modern-day spin on it.

In addition, the ensemble will include the one-and-only Jennifer Hartswick (Trey Anastasio Band) on trumpet and vocals. J-Ha, as she’s affectionately known to her fans around the country, got busy with a few of these same cats at the instant-classic Purple Party during Jazz Fest after dark in New Orleans back in May of 2019. Prince’s art—from the decadent decor, thrilling stage shows and visual imagery, to his innate sense of fashion— was always brimming with a divine feminine energy. Be it delicate falsetto vocal tones, extravagant high heels and androgynous elements, or merely performing alongside longtime collaborators Wendy [Melvoin] & Lisa [Coleman] and the venerable percussionist, Sheila E. No doubt Hartswick will serenade the joy fantastic and channel the goddess vibe in abundance when she takes the stage with Ghost-Note & Friends in New York City.

These players were not just randomly assembled to take on this icon’s canon—quite the opposite, in fact. Unlike most Prince tributes you might see in 2019, this group had several direct connections with the artist himself, as three members of Ghost-Note have direct ties to the late legend.

In 2011, after a few years gigging sans horn section—and inspired by performances alongside the likes of Hypnotic Brass Band and Trombone Shorty—Prince added an expansive 11-piece horn section to his ever-evolving band of badasses, the New Power Generation. Dubbed the NPG Hornz, this reintroduction of brass to the mix included saxophonist Sylvester Onyejiaka, aka Sly 5th Ave, now a touring member of Ghost-Note. Sylvester can be heard on the 39th and final album Prince released, 2015’s HITnRUN Phase Two.

Keyboardist Dominique Xavier Taplin, another current member of Ghost-Note, was living in Los Angeles when bassist Andrew Gouché -a gospel player who’d linked up with Prince – invited Taplin to work with NPG Q, a short-lived band project initially referred to as NPJazz. The collective was first assembled by Prince to serve as the backup band for his protege, Kandace Springs, essentially for a show at Paisley Park Studios in July 2014. The NPG Q featured the late John Blackwell on drums, Andrew Gouché on bass, and Marcus Anderson on saxophone. Prince contributed guitar parts on the album they recorded in August 2014. NPG Q disbanded when John Blackwell left to tour with D’Angelo and The Vanguard (along with REDD and Ahrel Lumzy) in October 2014. The album, unfortunately, remains unreleased.

Taplin also had a role working with another Prince protege, Judith Hill. The soul singer, who famously told Prince she wanted to make her album sound like Sly and the Family Stone, enlisted Taplin and NPG Q on her critically-acclaimed Back in Time LP, released in March 2015. Prince both performed on and produced this record, the release of which was celebrated with a raucous late-night affair at Paisley Park. This peformance saw Hill front a different band, the only holdover being saxophonist Adrian Crutchfield. It was at this celebration that bassist Dwayne “MonoNeon” Thomas Jr. entered the Prince picture.

Last year, Live For Live Music caught up with MonoNeon to get the scoop on his own connection and collabs with Prince. In that interview, he picked up the baton from the Judith Hill album and performance and led us through the tragic end of Prince’s life in April 2016. You can read an excerpt from that conversation below or check out the full interview here.

Live For Live Music: How did you end up on Prince’s radar? How did he reach out? What did it feel like at that moment?

MonoNeon: Prince found out about me from my videos on the Internet. One of his former managers contacted me via email saying Prince wanted me to come to Paisley Park. When I first got to Paisley in early 2015, I was hired by Prince to be Judith Hill’s bass player for her band. After that, I started playing with Prince, recording and doing live shows at Paisley Park with him.

When I got to Paisley, I wasn’t nervous or anything—I just wanted to play some music. I did think I was going to have to change my MonoNeon thing when I got there, but Prince obviously liked me for me or I wouldn’t have been there at all. In terms of preparing to collab with Prince, I didn’t prepare [laughs]. Prince just let me play. If he wanted me to play a particular thing, I would do so.

I remember the smell walking into Paisley [laughs]. The door I walked into when I arrived was in front of the NPG Music Club Room. I really didn’t have any emotion when I got there; I don’t get excited about much. I just knew I wanted to play—that’s all! The first time I met Prince was when he came to Judith Hill’s rehearsal, and he gave me a fist bump.

Live For Live Music: You spoke to Bass Musician Magazine in 2016 about the Prince jam sessions with Kirk Johnson on drums, Adrian Crutchfield on saxophone, and Donna Grantis on guitar. What were those jams like? What was recorded?

MonoNeon: Prince just wanted to get us together and play some music. The rehearsals we had would lead to jams and would not stop ’til he said, “See you tomorrow,” or “dinner break,” whatever. I would know that he was happy when he walked out of the rehearsal or a jam saying something like, “We should record that,” or “Mmm hmm.” The studio sessions I had with Prince, Kirk [Johnson], and Adrian [Crutchfield] were in Studio A. I would sit in the control room with P to record—he would be on keyboards. There was a lot of freedom recording with Prince. He would come in with an idea, and we would build on that.

The “Ruff Enuff” song I played bass on was written by Prince—he played keys and guitar on it as well. He asked to release it on TIDAL under my moniker for some reason. I don’t remember the exact number tracks we recorded, but it’s been said that there’s another track called “Soul Patch” that I recorded with Prince, Kirk, and Adrian that can be heard during the Paisley Park Museum tours.

Live For Live Music: In an interview, you spoke of your last hang with Prince, your last studio session, your last moments with the legend. Obviously, you had no idea it would be the final time. If you are comfortable doing so, can you talk about what sticks with you, what you may have said, or any emotions attached to the man?

MonoNeon: One moment I remember the most was when I was at Paisley with Kirk and Adrian for a photo shoot. I was on stage in the NPG Music Club Room playing around on Prince’s black/grey VOX guitar and Kirk said, “Prince wants you to come to Studio A.” When I got back there, it was me and P in the control room, and he asked me to play his guitar—the VOX guitar with the psychedelic design—along with a track we previously recorded. When I was done playing, I gave the guitar back to him, and he smiled and said, “I am out there in a minute.”

He didn’t come out for the photoshoot, but he liked pictures that were taken that night. One of those photos was used for the “Ruff Enuff” cover—this was in January 2016. I wish I would have told Prince I loved him and thanked for giving me a chance. My time with Prince ended too quickly—it’s something I’m still trying to get over! The last time I was with Prince was February 2016 recording in the studio; Prince posted two clips from the session on his Instagram.

Live For Live Music: Can you tell us how you came to know and love Prince’s music?

MonoNeon: Honestly, I didn’t listen to a lot of Prince’s music ’til I started playing with him. The only two albums I really listened to was For You and Dirty Mind when I was younger. The Dirty Mind album definitely influenced me the most because of the minimalism he used in the compositions.

Live For Live Music: Most Prince fans have a personal favorite era, tour, lineup, or album. What is MonoNeon’s?

MonoNeon: My favorite era/tour of Prince would be Sign o’ the Times era with Levi Seacer Jr. and The New Power Generation era with Sonny T. When I started playing with Prince, we didn’t play much of his old music. We played stuff from his Hit n Run Phase 1 and Phase 2 albums.

Rest assured, as the hour gets late on the final Monday night of the decade, things will be heating up at Sony Hall when the members of Ghost-Note and their extremely distinguished friends pay tribute to one of the greatest and most prolific musicians and artists to ever walk this earth. 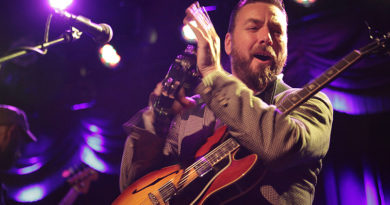 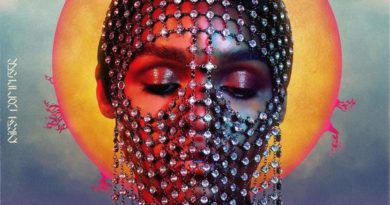 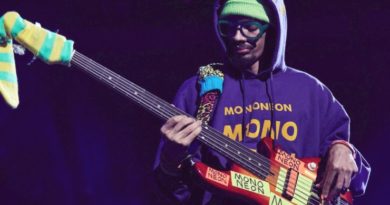 ICYMI: Ep.044 w/CHRIS HARFORD. from Marley at the Philly Spectrum in '79, to Richard Thompson and Lee Perry working on his records, from London to Boston, New Hope PA and Hopewell, NJ too, Chris explores what it means to be in a Band of Changes. He details his deep, filial roots with the likes of Sir Joe Russo, Scott Metzger, Marco Benevento, Chuck Treece, Dana Colley, Dean Ween, Robbie Seahag Mangano. The Muscle Shoals-like scene/studio coming together with these cats (and more!) in the fertile Garden State soil. Plus deep dives on BlancDUBlanc, dub reggae as medicine, Amfibian, the Elektra days, Ween fans, "Wind of Change", & so much more.Prepare for a lengthy, profound powwow with more rabbit holes than you can shake a chalice at. Ep.044 of *The Upful LIFE Podcast* is available on most pod platforms.***LINK IN BIO***LISTEN ---> bit.ly/upful044 #chrisharford #bandofchanges #blancdublanc #soulselects #musicianinterview #musicpodcast #dubreggae #musicology #upfullife @cmharford @soulselectsrecords ... See MoreSee Less