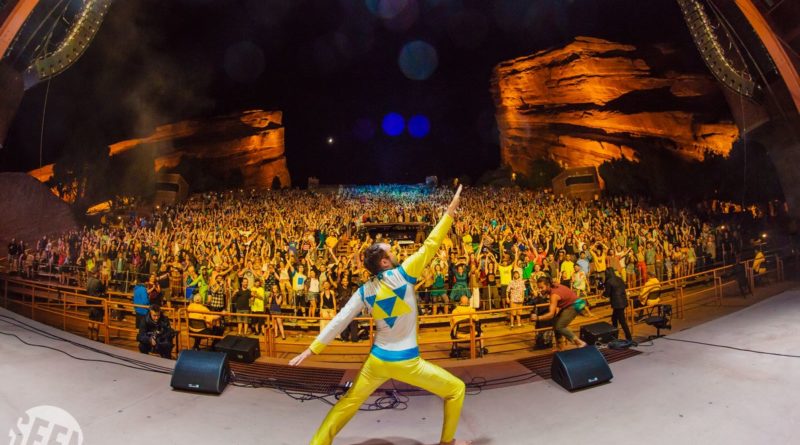 The Polish Ambassador is many things to many people: the world’s funkiest diplomat at the forefront of excursions musical, cultural, sociological, environmental, spiritual, and interpersonal; a leading purveyor of forward thinking, global dance music; a fearless Permaculture warrior; a record label boss; and a community torchbearer for Nevada City, CA and beyond. Polish was kind enough to chat with Live For Live Music about his brand new Jumpsuit Family Gathering, as well as his label’s steadily growing roster of artists — both familiar and brand-new — that have the people buzzin’.

Live For Live Music: Thanks for taking a few minutes, Polish. So much going on in the world of Jumpsuit. Let’s start with the festival you recently announced, the Jumpsuit Family Gathering in Taos, New Mexico, at the end of September. This is the first time you are personally curating and producing an event yourselves, top to bottom. What was the genesis for throwing your own party?

The Polish Ambassador: I’d have to go back a few years. It was just sort of chatter on social media. I started asking the community surrounding Jumpsuit Records if they would be interested in a Jumpsuit-curated festival, where they might want it to be, what it would entail. That was maybe a few years ago. More recently it came back into the discussion because Jumpsuit Records has grown so much and has helped quite a few artists gain footing in our scene. So that’s how the Jumpsuit Family Gathering was born.

I think people are really starting to trust the music that is coming through Jumpsuit Records. That’s a trust that only comes through time and a track record of solid releases. I think another aspect of the festival is that it’s part gift — a gift to the community that has come together through the music; a gift to the artists that have supported the label through releasing music with us; and a gift to ourselves (all the people behind the scenes of Jumpsuit) to come together for a weekend of memory making.

L4LM: Awesome. The Jumpsuit Records Family is constantly growing and evolving — especially the artists making music. saQi is an OG at this point, but nowadays, you got a whole new squad making unique and interesting original music. Let’s hear about the roster a bit from the funky diplomat who gave birth to the label, its ethos, and the jumpsuit itself.

The Polish Ambassador: I’m super stoked on the music that is coming together on the label. We’ve got some of the most fresh and original hip-hop I’ve heard in years with Ultimate Fantastic’s debut record, Super Human. Isaac Chambers released a reggae and soul inspired journey called Planet Fruition that is lighting up dance floors all over the west coast right now. Saqi is a master of mid-tempo worldtronica, Scott Nice is venturing into the tropics with his flavor of chill-out Carribean downtempo, and we got Ryan Herr bringing his own flavors, too.

The Polish Ambassador: And, of course, Ayla Nereo is the soft and more tender side of Jumpsuit with her solo projects and our Wildlight collaboration. We all need a good cry every once in awhile, and Ayla knows how to pierce directly through to the heart. . . . And, we’ve got a few new releases and brand new Jumpsuit Records artists that will be coming through the pipeline soon! So much amazing music to share. I really can’t wait!

L4LM: Tell me more about the intimacy of this new festival. I know you’re capping it at one thousand tickets, so you’re obviously going to keep it “family” as the name, Jumpsuit Family Gathering, says. What are some characteristics of this festival that will make it really intimate for those one thousand people?

The Polish Ambassador: One of the things that I love the most about some of my favorite smaller festivals like Beloved or Joshua Tree Music Festival is that we will have no overlapping sets. So from start to finish, musically, we are going to encourage people to be on this journey together. No FOMO. No sound bleed into other people’s sets. I think this will help us achieve and experience that Unified Field that we are craving so much these days. That being said, we are going to have certain other options. If someone needs a little solo space or space for their friends away from the music, we are going to have little zones where people can get away and take a break from the music. Yoga zones, tea zones, actiondays.us zones, et cetera.

L4LM:  I know the Jumpsuit community really comes together outside of the music in some major ways. What else is happening at the Gathering besides beats?

The Polish Ambassador: We are going to have ActionDays.us represented all three days — we’re working on project days right now. There’s going to be ecstatic dance every morning. We are going to limit vendors and select only a few of our favorites. Instead, we are going to place most of our emphasis on a “Gifting Row.” People have some part of themselves that they want to share in the gifting row. They can make a sign out of a piece of paper and offer up something they’re good at, something they’re passionate about. For instance, maybe I could write on a little sign “Music Production Tips” and maybe you could say “I have some writing tips” or someone can say “I’d like to play you a ukulele song.” Maybe there’s relationship counselor that could offer, you know, a five-minute relationship service. So we are going to try to offer some opportunities to encourage people to connect a bit deeper, little connection points for people to get to know one another if they choose to.

L4LM: So another thing that everyone is really excited about is the location of the festival in Taos, New Mexico. I know you didn’t come upon that decision lightly, so I’d be interested to hear why you and Ayla and the rest of the Jumpsuit team are stoked on Taos and maybe some ideas of what other adventures and things people could get into in that area.

The Polish Ambassador: We chose Taos for more than a couple reasons! You know, it’s one of those spots we do stop-overs when we go on those big bus tours. Really because everyone we travel with simply loves it there. Being on the Mesa creates quite a visual experience — wide skies, bright stars, magnificent mountainous backdrops. There’s a mysticism to the land that you feel as you walk about through the canyons, to the river, on the mesa. The history and present state of indigenous people’s are woven into the culture of Taos more so than other places I’ve visited as well. The Pueblo is still intact, and people still live there. The Rio Grande runs right through the area. There are some hot springs that locals might tell you about if you’re nice [laughs].

Of course, the Gorge and the Rio Grande in all of its wondrous glory is running through that zone. It’s definitely one of those natural wonders that as a human being, you get to witness, and you remember how small you are and how there is something much greater than all of us in this universe. The town is really special as well. It’s a walker’s delight. Great restaurants, coffee shops, little parks here and there, and the amazing Hanuman Temple. That place left a strong impression on me. A spiritually aligned community center that is a quick walk from downtown Taos.

L4LM: While we are talking about Taos, just tell us a little bit about the brewery, the venue, you know, what we can expect as far the layout or festival situation at that place.

The Polish Ambassador: The venue, Taos Mesa Brewing Amphitheater, is really rad. It will be my third time being there. I’ve played a couple shows there over the years. They just expanded part of their property into a campground. There’s an amphitheater that can hold, I think, if you really wanted to slam you could probably fit two-thousand people in there, but what we are trying to do is keep it intimate — around one-thousand people. Space to dance and commune with your neighbor you know? So there’s the amphitheater out back and then there’s also a venue inside. Music outside until 11 or midnight, and then the after-party goes indoors and, you know, for people who don’t want to do the after party thing, we will have a tea temple, maybe with some acoustic music, that will be over in the movement/ecstatic dance zone.

L4LM: What’s up the with brewery itself? I’ve heard only wonderful things.

The Polish Ambassador: It’s an awesome brewery right onsite. They are an independent brewery making really great IPA’s and ambers, and it’s also really a nice little pub restaurant. There is some good, organic, grass-fed burgers and tacos and good festival food to munch on. I think we will have a couple other vendors as well, cause you know, I like to have a beer now and again, but I also like to have some healthy tonics. We will certainly have some kombucha, some high vibrational and possibly raw food there as well.

L4LM: Awesome. You’ve been taking the community temperature and feeling its pulse over the last few years as it pertains to a lot of the festival variables, whether it’s vibe, size, and scope of various festivals or music stages playing against each other. Now it serves your intention and is also in line with what the people want. For example, you’ve even got space for the kids, making this a really inclusive atmosphere. Now I gotta ask one TPA historical music-geek question: The Ample Mammal set, can you give a little bit of hint of what people can expect or hope for, dream about?

The Polish Ambassador: Yeah, there are only two live sets I put out Polish Ambassador Vs. Ample Mammal round 1 and 2 — you might be able to find them on YouTube. It’s probably going to be closer to that. It’s going to be a throwback set but with some new tunes woven in as well. I’ve been diving back into some glitchy goodness and heavy bass with some of these newer jams.

L4LM: I’m thrilled that so many of your fans will be able to hear some of those beloved tracks and sounds from yesterday. You’ve really expanded the palette exponentially yet everything TPA is always rooted in the same vibe. Polish, I wanted to say thank you for taking a few minutes with me on all things TPA and Jumpsuit in 2017. I’ll see you in Taos, but I suspect a time or two before then.

The Polish Ambassador: Anytime B. Thank you.