Words by: B. Getz

After a few months of anticipation, a double-album release and the buzz of countless recommendations, South Florida’s The Heavy Pets returned to Philadelphia. On a chilly early November Friday just after Halloween, this new sensation dropped in on another Northeast jaunt. Last visit they rocked out Olde-City haunt Kyber Pass, a crusty room that smells of stale beer and plays home to mostly hard rock and punk bands. That show was one to remember for various reasons, not the least of which was memorable jams and good vibes from a band I had not yet grown familiar with.

I had delved deeply into the band’s debut record Whale, an ambitious double album, subsequent to their late summer Kyber show and was much more familiar with the tunes and style of this throwback group this time around. Throwback? I say that because this is a jam band, first and foremost, as Dennis Cook aptly described in his Whale review. These complete trappings of clichéd jam band wankery initially rubbed me the wrong way. I, like many, have moved away from the cookie-cutter jam band mold after a certain favorite group broke up just over three years ago. Nothing else of that nature has really struck my fancy, and in the beginning The Heavy Pets did not either.

However, good music is good music. Beyond the labels and genres, and certainly beyond message board tomfoolery, The Heavy Pets are in essence wearing their passions and idols on their sleeves. I began to embrace that ethos as the people over at Brotherly Love/Jason Abrams Productions went the extra mile to bring this new buzz band back to Philly despite the lack of a guaranteed packed room.

The Heavy Pets returned to the strangely named The M Room(Manhattan Room), located in the Fishtown section of Philadelphia, a blue-collar neighborhood not far from The Wire-like corners I used to visit in darker times. A strange feeling came over me when I returned to this neighborhood; however, all was relieved when I met up at the bar with the many Pets-fanatics from Florida and upstate New York (the grounds where this band came of age). And the good feeling only grew when they took the stage around 10 p.m. Taper Steve was in full effect, and even the bar adjacent to the music area was hoppin’. We were on our way to a raucous, fun-filled evening featuring the newfound glory of The Heavy Pets.

A recent Relix feature on the group had also piqued my curiosity, making me wonder if I was somehow missing something. The rave reviews all over the net and from friends who worshipped at the same Green Mountain altar I once did had to hold some water. Indeed they did. After much prodding, sometimes blind allegiance to a band can seem annoying if you do not feel that group is on any sort of serious level. Yet, when the Pets started playing in Philadelphia an innocence and passion shone through. I no longer rejected their steez and style, but welcomed it as a familiar breath. Sure, there was no new ground covered this evening, and many of the songs and sounds hark back to that favorite jam band of yesteryear, right down to the Languedoc-like guitar tones of Jeff Lloyd. Yet, the lack of pretension and the Pets’ joyous, unadulterated love of performing were at the forefront all night. The band was a machine, reeling off raging rockers, reggae-lite and some choice serenity. Songs I enjoyed and were well received by the ever-housequaking audience included “Off the Rails,” “Pleasure Tank” and my personal fave, “Help Me Help You,” their most fully-realized, well-written song with choice, exciting jam elements and an undeniable hook.

Despite a penchant for Trey-like guitar dynamics, Lloyd was a riveting performer and the undisputed leader on stage. His voice cracked in beautiful ways throughout the gig – again, the innocence factor rising to the top, naked for us to revel in. His guitar playing is invigorated and machine-gun-like at times and tastefully sloppy in that Neil Young sort of way at others. Conversely, the other guitarist, Mike Genius, was a technician tapping, shredding, cutting and carving intricate rhythm lines. The unsung hero of this band is keyboard player Jim Wuest, whose jazzy chops and shit eating grin make the band and performance more diverse and well rounded. His lounge-y organ runs and bright piano led the way for “Lloyd Gigs” to get his thing on proper. It was cool to see a band embrace the fearsome foursome, paying homage to a now historical group so many loved.

On the other hand, The Pets are damn near robbing some ideas, passages and whole lot of style from the Vermonsters, and paying homage can become biting after a while. These boys can write a song and have a boatload of talent. I sincerely hope they begin to find their own voice. Then, the sky is the limit for this dedicated bunch.

Yet, like any show, it was not all peaches and regalia. Drummer Ryan Neuberger seemed a bit out of place in this setting, a far cry from his tasteful, humble (read: well produced, mixed and engineered) playing throughout Whale. The acoustics at the M-Room left something to be desired, but that was partially alleviated by the incredible crowd and the cool vibe that permeated the venue. The Pets did their best to put on a banging two-set show. They are not yet where they want to be, and certainly fall victim to countless jam band clichés. However, The Heavy Pets are not anything to sneeze at. They wear their ambition tattooed on their sleeve, and the sheer elation when they lock in, and dare I say, jam out is worth looking past any growing pains. 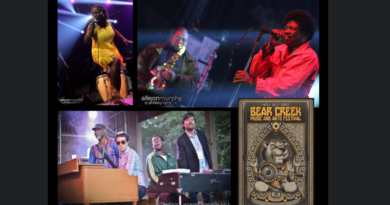