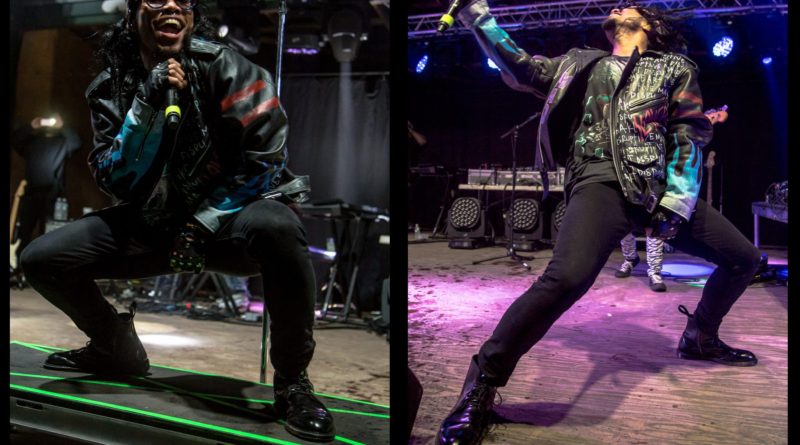 For the fourth consecutive year, the mystical confines of Spirit of Suwannee Music Park hosted Suwannee Hulaween. The lifeblood and heartbeat of this event is The String Cheese Incident, who both perform and inform a sizable portion of the weekend’s musical menu.

However, there exists another festival entirely, in a parallel universe, apart from but also integrated with SCI’s jamtastic vibes – a rock and dance music heaven, the avant-garde pulsating beneath the surface. Members of SCI are burners, and closely integrated within the worlds of visionary art and social activism; it’s no surprise that an event curated by this band would have its thumb on the pulse of the artistically and culturally relevant. Hulaween 2016 set a new standard in their offering of a diverse palette of cutting-edge music.

A testament to the vision of Suwannee Hulaween’s producers and a remarkable job of scheduling tetris allowed us to fill four full days and nights with musical magic, and not catch even one of the seven sets that The String Cheese Incident performed. There was just so much juiciness to be found elsewhere and everywhere, at Hulaween, there is something for everyone. A tip of the Kangol, and a bow in gratitude to the incredible team behind Suwannee Hulaween. It’s quite clear that your intent is all for our delight.

Without any further ado, here are the most magical musical sets from Suwannee Hulaween 2016.

In a whirlwind display of swagger and synergy, Anderson .Paak & The Free Nationals stormed the Amphitheater Stage at the stroke of 11 pm, with a jaw-dropping performance that left even the most jaded festival veterans in shock and awe. Clad in late 80s Sunset Strip attire, .Paak led the charge as the British Black Axl, delivering haymakers with reckless abandon for over an hour. The freakishly talented phenom basked in the spotlight as a frontman, emcee, singer, and preacher, detouring to the drum kit every few songs for some Neal Peart hood sh*t, too.

Taking the stage to a raucous intro set to “Welcome to the Jungle,” the burgeoning star offered the single baddest display of mojo to which this writer has maybe ever bore witness. After a greasy blaxploitation bass rumble introduced the frenetic, Hi-Tek produced “Come Down,” .Paak darted to the front of the stage, looked deep into the soul of the wildly raging masses, and when the music halted on the one, he declared “Yup, that’s exactly what a n*gga came fo!” The amphitheater exploded.

The rest of his set was a blur of art and attitude; in a word: flames. .Paak did everything and took us everywhere, all within the context of his stunning craft. The man they used to call Breezy Lovejoy traveled from Motown to Muscle Shoals, Marvin to Mayfield; he would turn on a dime, espousing the intangible hip hop ethos of Mos Def or Jay-Z, all clad in his original styles and backed by his band The Free Nationals. “The Waters” was pure pimpology, the R&B church of “The Season > Carry Me” went full-on gospelized sing-along, and when dude dropped Kaytranada’s self-glossing thunderclap “Glowed Up,” I legitimately feared for our collective safety.

To add to everything, at the end of the set – after a downright ferocious run through the Jamiroquai-on-swole that is “Am I Wrong?” – .Paak laid out a drum fill that neatly segued into David Bowie’s “Let’s Dance.” As people lost their proverbial minds and the energy popped off like a Moet magnum, just before the first lyric, .Paak cut the jam, again on the one, letting the moment hang in the air, as if to say, “Oh yeah? I can do that too.”

Nothing short of amazing. An iconic statement and an instant classic. Immediately on the shortlist of greatest performances to ever grace this hallowed stage. Anderson freaking .Paak. YES LAWD!

Going on after Anderson .Paak, especially at Suwannee at Friday’s stroke of midnight, was no small feat, but if there’s anyone capable of rising to such an occasion, it is without question Jim James. The venerable rock troubadour led My Morning Jacket onto the gigantic The Meadow stage, and the group unleashed a tour de force that stunned a touched, enveloped, emotional audience. With a potent blend of rock god spirituality and sheer sonic power, the Louisville, Kentucky quintet provided a wide angle shot detailing just why this band is the talk of Festival Nation.

James and Co. channeled the Spirit of Suwannee with a mighty sword through choice originals “Evil Urges,” “Circuital,” and “Run Thru,” interspersed with excellently placed covers like Elton John’s “Rocket Man,” and Pink Floyd’s “Another Brick in the Wall.” The Commodores’ “Easy” was performed at the perfect intersection of camp and conviction. As he cradled the huddled masses in the palm of his extended hand, during “Touch Me I’m Going to Scream Pt. 2” James exclaimed “Oh, this feeling is wonderful / Don’t you ever turn it off”; at that moment it was crystal clear – he was speaking to, and singing for, the entirety of Hulaween.

Future-funk behemoth Lettuce built their impenetrable reputation on the Amphitheater Stage at Spirit of Suwannee Music Park, anchoring the now-defunk’d mecca Bear Creek for its glorious seven year run. Suwannee Hulaween has stepped into the role as this venue’s defining event, and Lettuce returned to the historic scene of past crimes and its ceremonious stage for the second consecutive year, packing a pistol grip pump and laser-sharp focus like only they can.

There is nothing like the sun going down behind the live oak trees, betwixt the Spanish moss, as this krewe destroys this stage at this hour. When I close my eyes and imagine my own special happy place, it is here; for one more Saturday night at the park, Lettuce would not disappoint the dream, they would validate it. Opening with a brand new two-fer including the herculean “Blaze,” the funk Voltron took no prisoners and gave zero f*cks, offering clinics in crunkalogic science, and very little mercy.

Their all-too-brief smattering of genre-defying original art like “Phyllis” and “Trillogy” would have been enough to satiate the fervently boogie-ing contingent, but this squad has always been about that golden-era boom-bap thump. Drummer wunderkind Adam Deitch led stealth runs inside Gang Starr’s “Take it Personal” and “Wu Tang Clan Ain’t Nuthin to F*ck Wit,” while a mouth-watering, smoove-as-butta instrumental take on A Tribe Called Quest’s “Luck of Lucien” put sleepy-heads to bed. A patented blend of hood-rich grooves and mesmerizing mothership connections, within a power-hour Lettuce solidified the notion that they indeed are the Mike Tyson of the crunk game, simply put: the baddest band on the planet. Let Us Rage.

A dance music duo that defies categorization, Bob Moses mainlines the vibe. Their ethereal blend of sexy house, indie shoegaze, and lover’s folk is among the most intoxicating elixirs on tap in 2016. On Saturday night, the kaleidoscope of wonder that was Spirit Lake played host to the live-band incarnation of Bob Moses; the Van-City villains stepped into the spotlight assuredly, pimp-hand strong with pomp and panache.

As per Suwannee custom, the boys checked any traces of scenester self-awareness at the festival gates, and in getting with the Hula spirit, donned 80s hair metal costumes before taking the stage as Guns n’ Moses (yet another GnR theme, a testament to how Axl and Slash’s reunion is cultural zeitgeist). Adding a drummer to flesh out their rock band/Ableton sonic attack, the trio opened ceremony with a pneumatic “Like It or Not,” the descending, emotive piano voicings setting an ominous yet uplifting tone. When the pulsating, four-to-the-floor kick drum finally launched the song skyward, I could not tell if this was the Joris Voorn remix, or if these guys were just really stoked. A hauntingly beautiful version of their pensive rumination “Far From the Tree” followed, and we had arrived at levitation station.

The ensuing sixty minutes was a tornado of torrid, orgasmic dance floor energy, as Tom Howie’s brooding, reverb-drenched vocals and sparse guitar comps washed over the bubbling revelers. Bombastic live drums juxtaposed with Jimmy Vallance’s libidinous Deep House programming made for a maddeningly mystical menage that torched the sultry shimmy-session flames ablaze. Standout jams included “Grace,” the triumphant “All I Want,” and breakout pop single “Tearing Me Up.” Clearly Bob Moses has taken some time to develop a live performance that matches their magical studio output, but ’twas the vibrant Spirit Lake environs coupled with a Hula-massive in prismatic full bloom that delivered us to the heart of a new paradise city.

Just a few years ago, the idea of a house music headlining DJ set at Suwannee would have been considered blasphemy. However, thanks to the dogged efforts of Chicago’s Silver Wrapper, events like Tipper & Friends and Suwannee Hulaween have diversified the sonic and cultural portfolio presented at SOSMP. Case in point: on the biggest night and the biggest stage of the venue’s year of programming, it would be two siblings from Surrey, UK throwing down monster deep house grooves to thousands of ragers, as Disclosure headlined The Meadow just after midnight on Saturday.

Opening with an appropriate passage from “Thriller” (recalling KDTU’s classic cover on this very same field circa Bear Creek 2009), brothers Guy and Howard Lawrence captained a ninety-minute joyride through the best and most accessible untzes available all weekend. Naturally, the duo’s smash hit “Latch” featuring Sam Smith went over huge, but it was “When A Fire Starts to Burn” that really set off the Suwannee. Humongous synth-bass rollers gave way to luscious R&B choruses, wound into a furious crescendo time and time again. Hippies properly getting loose to house music; the sheer joy and unabashed glee was sizzling, and palpable.

The astonishing visual accompaniment from two-time Knight of Illumination winner Will Potts was the talk of the festival the next morning, his cutting-edge projection mapping and laser light show embellished the Disclosure experience spectacularly. As the dynamic duo laced up anthems “Nocturnal,” “Holding On,” and Flume’s “Never Be Like You,” the frenzied energy of a reverberating Hula-nation reached feverish pitches, a feeling that will not soon be forgotten by anyone who shared in the groove. Say it ain’t so – Deep House get-downs in the Suwannee swamp?! This must be what victory tastes like; it is a proud day, indeed!

5 honorable music mentions are in order (but in no particular order):