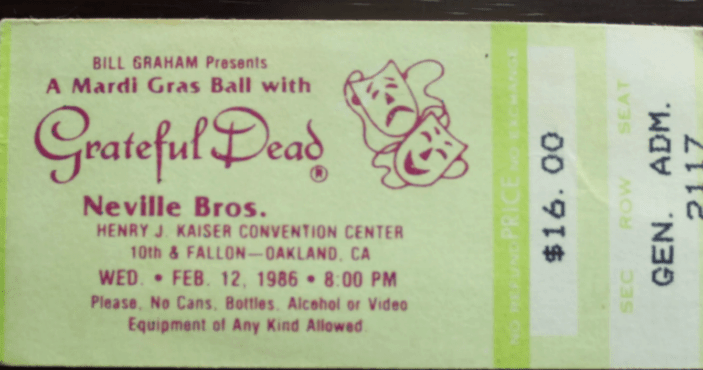 The recently-departed Art “Poppa Funk” Neville was a cultural and musical icon who personified New Orleans music for over 50 years. The keyboardist and singer co-founded The Meters and the Neville Brothers, among the most legendary bands to call New Orleans home, and vocalized the classic Carnival anthem “Mardi Gras Mambo”, to name a few. The Meters and the Neville Brothers have long been synonymous with the gloriously funky traditions of the beloved Crescent City. Without question, the centerpiece to all of this wonderful music was none other than Mr. Arthur Neville.

According to manager Kent Sorrell, on July 22nd, the patriarch of the Neville family passed away peacefully at his home on Valence Street, the same street where he lived, raised a family, wrote, and recorded music for so many years of his life. After a debilitating back surgery several years ago, Art Neville had been dogged by recurring health issues, yet he insisted on performing as often as he could, with the Neville Brothers and later a reconstituted Funky Meters, and occasionally, the original lineup of The Meters would reunite for extremely special occasions.

In July of last year, The Meters received a Grammy Lifetime Achievement Award from the Recording Academy. In December, Neville officially announced his retirement from performing music after over a half-century of entertaining fans around the world. According to NOLA.com, Art Neville spent his precious last few months at home with his ever-doting wife Lorraine, hanging out with family and friends.

The lasting impact of Art Neville’s contributions to New Orleans funk music simply cannot be overstated, and his connections to the rock n’roll communities around the world run decades deep, especially with regard to the Grateful Dead, Keith Richards, Mick Jagger, and Paul McCartney, among others. The Neville Brothers, like The Meters before them, had always benefited from the support of celebrity fans and major recording artists alike. That attention sometimes turned into opening slots for The Rolling Stones, and also an opportunity to be the house band for McCartney’s birthday party aboard the riverboat Queen Mary.

Most fortuitous to their career, at least on a sustained, national level, were a series of shows where the Neville Brothers were cordially invited to open for the Grateful Dead. The Dead’s huge audience, accustomed to long, sprawling, groove-oriented jams, was perfectly suited to the Neville’s live magic onstage. Better yet, the Dead’s army of fans had a strong word-of-mouth network, a multi-cultural bent, and an appreciation of socially-conscious material. Soon enough, word had spread that The Neville Brothers were quite a special concert experience. Before long, the two contingents were collaborating onstage during the second sets of various sizzlin’ Dead performances, and the addition of The Neville Brothers made for some unforgettable jams throughout the late 80’s.

“When the Neville Brothers hooked up first with Bill Graham -and through Bill Graham – with the Grateful Dead, everything changed for the better,” Cyril Neville said in the aftermath of Jerry Garcia’s death in the Summer of 1995. “We connected with that audience. They really understood who we were and what we were doing. And you could feel that coming from the audience. When you look out into the audience now and see all those colors out there, not just the colors on the tie-dyes, but all those different types of people, that’s what the world is supposed to be about,” Cyril Neville said.

Nowadays in New Orleans – not just during the myriad tributes over Jazz Fest nor the Voodoo vibes around Halloween – the Grateful Dead community and catalog is omnipresent, and their songs fill the air, their influence alive and well. Rest assured it wasn’t always this way; but it would be the prodigal sons of NOLA funk, the Neville Brothers, who would pave the way for the Grateful Dead’s music and ethos to unequivocally take hold in the Crescent City. In turn, the Dead would connect the royal family of NOLA with a fervent, admiring audience that remains loyal and vibrant until this day.

“The Neville Brothers opened for the Dead several times in the 80’s, and they piqued a lot of Deadheads’ curiosity about New Orleans music and culture. The Neville Brothers really were my introduction to this great city.” said Jon Phillips of Silverback Music, a longtime Deadhead who currently manages George Porter Jr. (co-founder of The Meters), and Dumpstaphunk, which features Art Neville’s son Ian Nevilleand nephew Ivan Neville, as well as Tony Hall and Nick Daniels III, members of the Neville Brothers’ family tree.

Clearly, these familial roots run deep, from California’s burnin’ shores of the Bay Area all the way to uptown New Orleans, and beyond. So, we thought that we’d hop in the wayback machine and have a look at the various sit-ins and collaborations between the GD and the Nevilles through the years, and do so in tribute to the memory of the late, great “Poppa Funk” Art Neville.

The relationship between the Neville Brothers and Grateful Dead began on New Years Eve 1985/86 in Oakland, California. The Neville Brothers did not collaborate with the Dead on this occasion, but it was a fine introduction of the already-legendary NOLA institution to the rabid NorCal Dead freaks united. Naturally, the fans were intoxicated by the Neville’s Bayou boogie and timeless Crescent City anthems, and the seed was sewn for just a few weeks later.

For the most part on all the collaborations between the Dead and the Neville’s, the participants included Art Neville on organs and vocals, Cyril Neville and Aaron Neville on vocals/percussion, Charles Neville on sax, Neville Brothers mainstays Brian Stoltz on guitar and “Mean” Willie Green on the drums. The Neville Brothers would both open and sit-in on back to back GD shows at Henry J. Kaiser Auditorium in February 1986. On February 11th, the third night of a five night run, the NOLA krewe would appear during “Drums”, “Eyes of the World”, “Not Fade Away”, “Hey Bo Diddley”, and “Goin’ Down the Road Feelin’ Bad”.

The following night, Februrary 12th, the brothers would again appear during “Drums”, then help the GD unveil their first ever take on “Willie & the Hand Jive”, before cruising thru “The Wheel”, and then dusting off “Midnight Hour.” The Wilson Picket number, once a Pigpen-sung anthem of the sun back in the late 60’s, was revved up once again and bolstered by a robust performance from Art “Poppa Funk” Neville, before the teams finished strong with Chuck Berry‘s inescapable “Johnny B. Goode.”

On summer tour the following year, just at the front end of the “Touch of Grey” madness of the late 1980’s, the Neville Brothers opened a show at Civic Arena in Pittsburgh PA. After a particularly well-received opening frame, they would then join the Grateful Dead for a spirited run through the Carnival anthem “Iko Iko”, including an authentically NOLA-fied section from Art Neville, the “Mardi Gras Mambo” vocalist  who’d commandeered GD keyboardist Brent Mydland‘s trusty, growling Hammond B3 organ and made it his own in just a matter of moments. The second set also saw the GD debut of “Day-O” aka “Banana Boat Song”, the brothers cruise through a smokin’ “Man Smart, Woman Smarter”, a soulful reading of Bob Dylan‘s “Knockin’ on Heaven’s Door”. Bob Weir chose to break out The Rascals’ “Good Lovin’”, before another take on “Johnny B. Goode” closed out this rust belt rager in the summer of ’87 with authority.

For New Year’s Eve 1987/88, the GD reunited with their pals the Neville Brothers in the Bay Area once again, setting the Henry J. Kaiser Auditorium ablaze with a charged-up run through familiar songs “Man Smart, Woman Smarter”, “Iko, Iko”, “Day-O”. The Dead and the Neville’s then unveiled the GD’s only-ever rendition of Bobby Freeman‘s “Do You Wanna Dance” before another “Knockin’”. Again it would be Art Neville who would steal the show at times, with his lyrical gusto and B3 mojo, and a smitten Mydland was more than happy to share the spotlight with an R&B/funk/soul icon of the Hammond B3 and the great city of New Orleans.  The elixir of Mydland’s greasy Michael McDonald vox and lyrical keys juxtaposed with Art Neville’s own inimitable uptown swagger served to inspire Garcia in a visible fashion on each collaboration.The 1987 New Year’s Eve show in Oakland was broadcast live on pay-per-view, and later immortalized on the Ticket to New Years VHS release.

In October of 1988, In the Dark fever was in full swing, and the Dead made one of their extremely rare-appearances in New Orleans since they were “busted on Bourbon Street” in January 1970. The GD were playing the Keifer Lakefront Arena (later rechristened UNO Lakefront Arena), while the late British pop star George Michael was booked at the enormous Superdome, with female-rockers The Bangles as direct support. Why am I bringing this up? Because the Bangles and GD worlds had collided outside a NOLA hotel earlier that day, and at the tail end of the NOLA GD show on 10/18/88, not only do pals the Neville Brothers show up through the back door of the arena just in time for “Drums”, but before you know it, all four women from The Bangles, including Bob Weir’s new friend Susanna Hoffs, were singing backup vocals with the Dead and Nevilles for a pair of tunes at the end of this peculiar gig. Though it was clear The Bangles were not exactly familiar with “Iko Iko”, the “Manic Monday” girls stepped up with some nice vocal harmonies on the Dylan chestnut “Knockin’ On Heaven’s Door”. Rumor has it, members of all three groups were spotted walking like Egyptians throughout the French Quarter, deep into the N’awlinz night.

The final jams onstage between these two storied franchises took place on a sweltering evening, July 10th, 1989  at Giants Stadium in East Rutherford, NJ just outside New York City. Beginning with the customary collab on “Drums” and “Iko Iko”, Jerry Garcia directed the boys into Bob Dylan’s “All Along the Watchtower” before steering the swollen collective into a stirring rendition of “Morning Dew.” Garcia’s “Dew” solo is nothing short of a scorcher, and in the video you can see the late Art Neville and the late Brent Mydland grinning from ear to ear as the Fat Man really gets the stadium a-rockin’. He belts out the second “doesn’t matter anyway” and takes off on another intergalactic journey, as the Neville’s guitarist Brian Stoltz serves to stoke Garcia’s flame in a special kind of way, whilst Art Neville offers some thunderous B3 action beneath it all. Rounding third with a spirited gallop, both bands race through the Dead’s own “Sugar Magnolia” before closing the book between the two royal families, appropriately enough, with another scintillating version of staple number “Knockin’ on Heaven’s Door.”

In addition to the various aforementioned Neville/Dead sit-ins throughout the late 1980’s, Jerry Garcia also contributed guitar to “You’re the One”, found on The Neville Brothers 1987 LP Uptown.