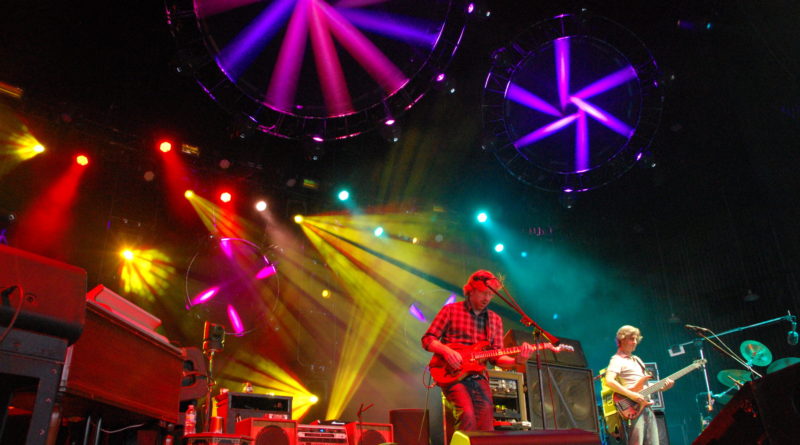 The Phish from Vermont

A Breath of ‘Fresh Heir’;

PHISH
8/26/2012
Charlotte, NC – Verizon Wireless Amphitheater
Phish in the summer can be more than a rock concert. Friends one only sees while attending festivals or concerts ascend together onto new cities or familiar venues for new experiences. On a late Sunday in August, the flock falls onto Charlotte, NC. The beautiful day shines down on the kindred spirits sharing beers, BBQ, tunes amplified through boomboxes, and laughs. One may be so bold as to say that the highlight of the phish experience is this moment of pre-game relaxation and friendship formations…But there are four guys waiting in the venue that quickly turn any such storybook notion into absolute folly.

As Trey, Mike, Jon, and Page take the stage, cheers erupt. In the pit, a clever fan holds up a large sign with Trey’s face super imposed onto Rambo firing a large weapon next to the words “MACHINE GUN”. Trey notices, chuckles, and then makes a few machine gun noises as though he were lock and loading the ‘ocedoc’ for the oncoming onslaught.

Phish often mocks the realities that others operate within. For example, the reality of possession, personal identity, and separateness. A simple phrase like “I’ll show you mine if you show me yours” creates all sorts of separateness – You and I, Mine and yours, I’ll only do this if you do that…In response to such an attitude Trey laughs – “I’m breathing hard (hah) Open The Door!!”

From the first notes of “Bag”, IT was in the air. One may call IT extra energy – the kind that sometimes shows up at a show for reasons one can not explain, but some may call IT an awareness of what is always present. So, for whatever reason, IT was on in Charlotte. If “Bag” was an opening knockout punch, then “Moma” acted as two jabs to the dome as one fell to the floor. “Heavy Things” could be seen as stars twirling above with beautiful guitar work from Trey.

On the surface, “Ocelot” features Trey Anastasio but on this night it was all Mike. Thick bass grooves drove the jam. It was as though Mike was sending Trey out into limelight for some glory but he was the ring leader – as if to say “Yeah, come and fuck with mine”. During “Bathtub Gin”, a thick sonic pile of bubbles frothed after explosive opening piano solo from Page before Trey toyed with the bubbles in the waters of reality that others invest their sense of well being within. The Jam starts childlike and ends with nuclear holocaust-esque sound structures – leaving behind a world where the end is the end and not a new beginning. An inherently sick world led by sick men with horrible diseases….

“Fluffhead” can have questionable placement – when the song starts some may express sounds of distaste but in Charlotte when the opening chords were played, everybody smiled, laughed, or nodded with utmost approval. The peak exploded with the same jubilant energy that witnessing your team throwing a game winning touchdown this fall will bring.

After “Alumni Blues”, Trey verified some factual information. Like Fishman’s record at UVM – Lowest gradepoint average ever recorded in school history…For a non-fraternity student… .0036 GPA. Luckily, after Trey and Jon were both thrown out of UVM, Page recruited them to attend Goddard college. The progressive college paid Page $100 for recruiting two new students. According Mike, Page is still trying to get Mike for the $50. Tube (from the mind of Jon Fishman) provided Page, The Headhunter, with ample space to flex his Clavinet muscles. Though the tube was shorter than most would like (meaning less than 10 minutes) it packed a powerful punch.

Trey, announcing they would play another song from the mind of Fishman, asks the audience to count the number of times the word “you” is in the song. Fishman tries to provide an explanation by saying “the context…” before Trey, Jon, and Mike all say “just play the (fucking) song”. Trey asks, “are you going to tell the story of who the song is about?” prompting Fishman to throw the microphone behind his head. Page announces “Start the song or we’ll start telling stories”. And so “My Sweet One” Begins with the thunderous bluegrass drum riff from Fish. David Bowie closes the first set.

From the first bombastic opening notes of “Crosseyed & Painless”, it was obvious that Phish was All In – no one was out. The funk jam dissolved into an ambient wavelike soundscape before washing unto shore as “McGrupp (and The Watchful Hosemasters)”. The Gamehendge rarity delivered on all cylinders with its lyrics about divinity being expressed with the temporal tools of time and space. Page’s piano solo during “McGrupp” is a top of the mountain phish nugget.

The opening notes of “Mike’s Song” was a most welcome sound, signaling the raucous grooves were to return with a vengeance. At the drop into the jam, the venue was levitating. Though the jam didn’t get too exploratory, every note was played with purpose. After a quick breather from “Bouncin'”, “Axilla I” launched everyone back into the stratosphere. Most people expecting to hear the beginnings of “Weekapaug” were happily wrong as “Tweezer” began. The jam reached blissful levels of selfless melody and groove before surprisingly segueing into “Harry Hood”. After the dualistic composed sections of laid back keyboards and vicious screaming guitar work, Trey’s solo oozed with patience before coming to a head.

After a “Horse>Silent”, and a celebratory “Weekapaug”, Set II’s exclamation point came in the form of a last chance to dance “Suzy Greenberg” .Knowing we’d be treated to something and “Tweezer Reprise”, we were all ready for a big encore but nobody was quite ready for what would ensue. Mike lowered his mic stand and fell to his knees. Trey fully extended his mic stand vertically and horizontally before started thing punk metal anthem “Big Black Furry Creature From Mars”. The energy was so explosive that one may not have even noticed Trey ripping his guitar behind his head or sprinting laps around the stage. During the “Tweeprise” intro, Trey stumbled into some oversized balloons and kicked them away like he was pissed.

After detonating “Reprise”, the dust settled, and someone shot off a very expensive fireworks display in the parking lot that seemed to last forever. Yes, Phish is a rock concert and yes, Phish is a great way to travel with friends. But, sometimes it takes a show like this to help one remember that Phish can be a conduit for awareness of that which loves us and connects us to everyone and everything.

Celebrating the career of Hope Sandoval, a key voice in the evolution of dream pop on her 55th birthday
View on Facebook
· Share