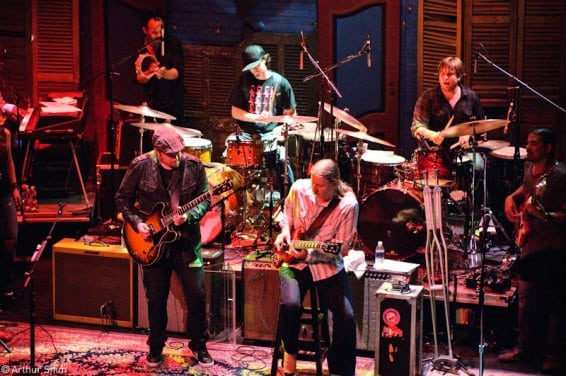 Words by: B. Getz | Images by: Casey Flanigan

The wise superhero SuperDee once told me, “Judge your Jazz Fest not by what you saw, but what you were forced to miss.”

Those who have been to Jazz Fest know that it’s extremely difficult to decide what shows to see. Head-to-head, there is simply so much incredible music, and rare treats, to indulge in over the course of ten days. Therefore, there will be plenty of fantastic music NOT covered in these dusk til’ dawn highlight. This is simply one boy’s second weekend journey to the musical Mecca that is Jazz Fest… After Dark.

No better way to start Fest then Dauphine and Lesseps in the Bywater, Thursday night at Vaughn’s. Though we arrived too late for his BBQ, Kermit Ruffins & the Barbecue Swingers welcomed us to town like only they can. A joyful mixture of brassy jazz, sultry R&B swagger and modern day braggadocio, Ruffins’ band mixed The Isley Brothers with Gnarls Barkley, with some Mystikal to boot.

Backbeat Foundation hosted another HBO star/brass band alum session at the Blue Nile, where Trombone Shorty & Orleans Ave seized their star turn, tearing down the Quarter for nearly three hours of nonstop NOLA stomp. His crack band, expanded for the occasion, more than ably laid a local foundation for Troy Andrews to delve deep into the Treme, unleashing blistering cuts from new album Backatown. Shorty cooked up a jambalaya of choice local brass anthems with a crunk-rock edge; a mammoth Marvin Gaye cover brought the house down.

Karl Denson’s Tiny Universe‘s Thursday late night show is always the place to be at Fest. The first in five years (and only KDTU Jazz Fest booking) was no different. Playing Tipitina’s Uptown until sunrise, Denson reminded us all of why he remains the King of Late Night Jazz Fest. The Tiny Universe dropped mammoth sets, balancing older favorites “Family Tree,” “Make it a Cosmopolitan” and “Because of Her Beauty” with blazing new joints like the blaxploitation banger “Brother’s Keeper Pt..II,” a lengthy dub-drenched take on “Mighty Rebel,” and an otherworldly keyboard battle between Robert Walter on Hammond B3 and Marco Benevento on Fender Rhodes.

The new frontier of live electronic music was on display throughout Friday night, a tribute to both the evolution of the genre and the breadth of the Jazz Fest palette. With respect to the Rusko/Big Gigantic party that went late the night before, for this writer, Friday was about pulsating beats. With a new take on dubstep delivered Live PA style, Uprise Dub kicked things off with proper wobble at Dragon’s Den; dark drum & bass deep in the Quarter. A progressive minded dubstep swagger with Bukem-informed jazzy jungle, Paul Knight is a breakout waiting to happen. Big t’ings in store for this rumbling conglomerate.

Pretty Lights set it off substantially at Republic. With the sold out massive getting crazier by the song, kids were crowd surfing and bouncing off walls; absolute bedlam as dancing spilled into the street. Mixing bombastic originals with seriously dirty reinterpretations, Derek Vincent Smith knows how to rock a crowd. “More Important than Michael Jordan” ignited the fuse, but the set closing “Rumpshaker” remix was a five alarm fire.

Both Friday and Saturday nights, Bear Creek Presents hosted Break Science at One Eyed Jacks to teeming late revelers. Both shows kicked off at the ungodly hour of 4 a.m. Drummer wunderkind Adam Deitch knows no boundaries, and clearly the Rusko set had inspired him; Friday night’s set leaned heavily on dubstep wobble and thunderous bottom end. Saturday saw a more diverse assortment, with Borahm Lee unleashing a ridiculous array of skills amidst mountains of keyboards, samplers and laptops. Highlight: choice tribute to the late Guru, in the form of a punishing take on Gang Starr‘s “DWYCK,” demolishing of Public Enemy’s seminal “Bring the Noise” in a way that would make Hank Shocklee proud.

Superfly Presents always provides a quintessential NOLA experience on the Creole Queen Boat Cruise; and this year’s Greyboy Allstars hoedown was the ideal soundtrack. While Kirk Joseph’s 504 Brass Band held down the deck with typical Crescent City flair, a newly recharged GBA came correct indoors. Incorporating new rare groove styles amidst a sea of classic West Coast boogaloo, the Allstars were back on their mojo. A spooky, enchanting version of “Nautilus” was the highlight for this writer.

Backbeat Foundation hosted two killer Saturday shows at Tipitina’s French Quarter. Bonerama killed the raucous room with a smattering of funky brass and rock energy. Joined by Scott McCaughey (guitar), David Silverman (sousaphone), and R.E.M.‘s Mike Mills (bass) the troupe tore thru an Alex Chilton tribute, and spirited takes on “Cabbage Alley” and “Lovelight.” Later, the eclectic grouping Some Cat From Japan interpreted the works of Jimi Hendrix with a fresh take, and a lot of mojo. Led by Will Bernard and Nigel Hall, and ably assisted by Scott Metzger, Ron Johnson and Bonerama drummer Eric Bolivar, the spirit of Jimi was on full display with unique new vision.

A sisterhood of cities was on display at Howlin Wolf for The Royal Family Ball. George Porter and his Running Partners, Zigaboo’s Funk Revue and Break Science held things down early for the vicious combination of Soulive and Lettuce. Soulive delivered one of the final slamming Jazz Fest performance, ripping as a trio or when rolling augmented. But quite frankly, the finest hour belonged to a reinvigorated Lettuce, whose only performance of the weekend was a rage to remember. Welcoming back Boston OG’s Adam ‘Shmeans’ Smirnoff and E.D. ‘Jesus’ Coomes, the boys tore the roof off the Wolf. As if they didn’t already have enough ammo, Ian Neville, Maurice Brown and Khris Royal joined the fray, as did Skerik for the final banger. Lettuce had conquered Jazz Fest once again, sending off the masses with relentless, colossal funk jams.

Like a whirlwind, it was over just as suddenly as it started. Jazz Fest will do that to ya. Once again, it was an epic adventure of giant proportions. Special thanks to Paulina Trujillo and the Backbeat Foundation, Megan Sabella at Newsom Management, Paul Peck and Superfly Productions, Paul Levine and Bear Creek, as well as all the venues and promoters that join together to provide these rich experiences. Most of all, a heartfelt thank you to the New Orleans Jazz & Heritage Festival and the City of New Orleans, without whom none of this would be possible.