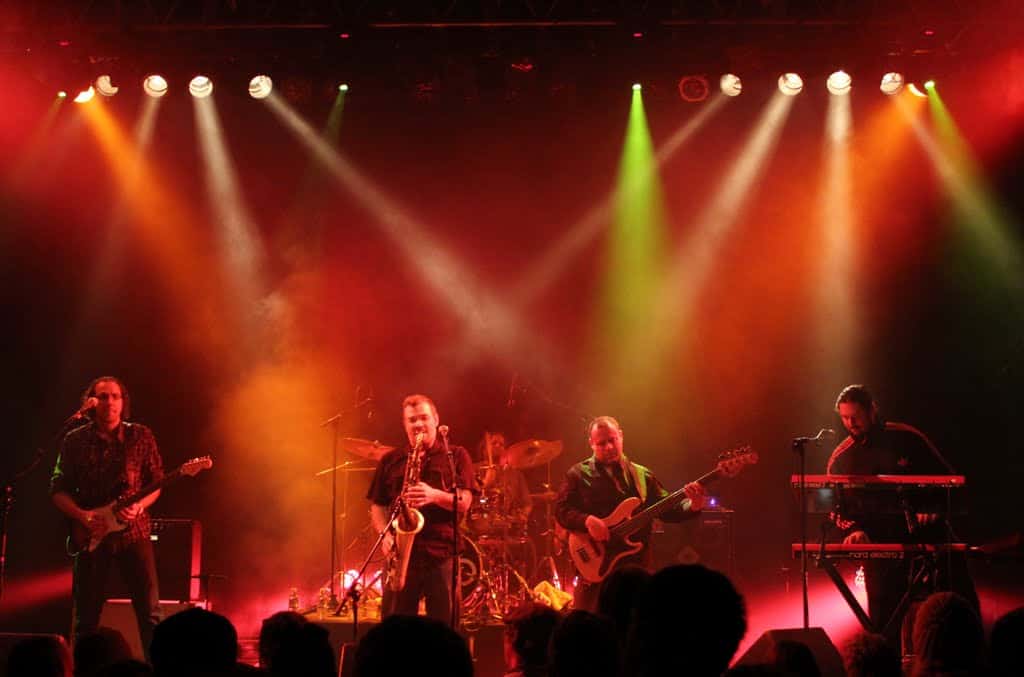 Words and Photos by Jon Prins

Big Thanks to Listen Up Denver for the story. Find the original here. Despite the news of a major snowstorm headed for the Front Range, many people came out in the snow and freezing temperatures to check out the relatively newer supergroup, Kung Fu. While most who made the trek to The Fox had never seen Kung Fu, there was still quite a buzz about these guys since they had already amazed other area crowds at shows earlier on their Occupy Colorado tour. Local sextet, Smooth Money Gesture, opened the show and helped bring in a different crowd of fans who came to support the young group from nearby Nederland.
Smooth Money Gesture got the crowd warmed up on this bitter cold night and people were really grooving to the funky sounds of this sextet. Smooth Money has been nestled up in Nederland pumping out heavy grooves for a few years now. Even though still a relatively unknown group (even in the Boulder/Denver area), “Nedheads” have been singing high praises of them for quite some time now. They played a healthy mix of originals and covers, and even brought out a full horn section at one point. Peter Gabriel’s “Sledgehammer” was a great choice and a highlight of the night as the horns swirled around just like the snowflakes outside. Smooth Money Gesture should keep the future of the Colorado music scene shining bright. These guys were a real treat to experience.
Kung Fu. No, not the ancient Chinese form of martial arts, but the Jazz/Funk/Fusion quintet from Conneticut. Kung Fu consists of Tim Palmieri (The Breakfast, guitar), Todd Stoops (raq, keyboards), Dave Livolsi (Jazz is Dead, bass), Rob Somerville (Deep Banana Blackout, saxophone), and Adrian Tramantono (The Breakfast, drums). These guys formed out of a jam session in late 2009 and though they have not been on the scene long, they have definitely been making waves recently. They have both opened for, and played with, some of the bigger acts in the Jamband world.
Their sound is heavily influenced by the sounds of the 70′s jazz fusion movement and they had the crowd locked into their funky hooks and complex time signatures. At times, dancers found it hard to keep up with the break neck speed of the band’s tempo as they admired the Palmeiri’s chops on the guitar. He is truly one of the better shredders I’ve seen in a while. The group as a whole rolled along like a well oiled machine, leaving many people in awe of the heavy jams that were being created on stage.
Late in the show, it came time to pay tribute to the funky Don Cornelius. The Soul Train creator and host had died the day before of an apparent suicide leaving the world mourning an icon. The band helped celebrate his life with an uplifting version of The Headhunters’ “God Make me Funky.” This funk classic had me singing and smiling ear to ear. As the group rounded out the show with a few more originals both band and audience were grateful for such a great night at the Fox. Before the left the stage, the band thanked us for being such a great and responsive crowd. The guys had a blast on their mini Colorado tour and we can only hope that the sounds of Kung Fu will occupy our ears and hearts again very soon.