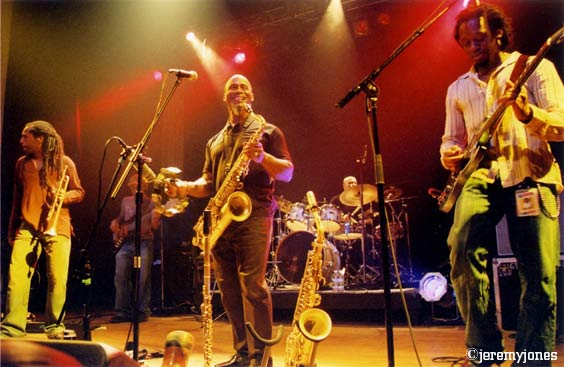 The sexy black groove machine that is Karl Denson’s Tiny Universe trampled through the East Coast trifecta of Philly, Manhattan, and our nation’s capitol, Washington DC, this past weekend in vintage form. The recent additions of ex-Greyboy Allstars drummer Zak Najor and Chris Littlefield on trumpet gave their Atlantic shore faithful a new, and different dose of that ever-so-chronic medicine we have come to love.

No matter the close proximity of these cities, in spite of the similar setlists, each show and evening was its own adventure, its own booty-shaking dance party, its own lusting R&B meltdown, its own afrobeat meditation, and its own James Brown sinning gospel.

Opening the Theater of the Living Arts show was Screaming Headless Torsos, and they would appear with KDTU during their second set. The band walked onstage sans Karl, and silently tuned up under the house music (ala GD). Karl rapidly appeared carrying his trademark flute, tenor and alto saxophones and a setlist in his mouth. He directed the band into the driving “Thirty-two,” a chameleon of a song that changes styles, tempos, melodies, and general vibe throughout. Brian Jordan immediately serenaded with a Grant Green-esque melody that acted as a crescendo which drops into a half-time hip hop head nod beat. Then KD lets the congregation know what time it is. Zak Najor ripped snare flurry breakbeats throughout as resident weirdo Mike Dillon banged furiously on the percussion; then in a Prozac moment calmed down significantly to lace a serene vibraphone solo over said Jordan progression.

Such speedy interchanging parts would characterize the newest strength in this rolling thunder revue throughout the weekend’s madness. Karl honed his vocals on the Rhodes led “Perfect Circle,” where keysman David Veith announced his arrival with tasty Fender voicings and B3 responses to Karl’s love cries. “Family Tree” and “The Grunt” established that gritty bass and horn soul that characterizes this slick timewarped band. They root their sound, vibes and aura around the psychedelic rare groove pimp wit’ a caddy and fur frozen space in time about thirty years ago in the cities. In places where that sort of thang worked and flourished, like Philly (NYC & DC too) seamlessly welcome such energies to its halls and streets. The Illadelph soul dream was alive during the first set’s highlight, “Soul Drifter > Fallin’,” where as the first tune cooked up the lust, the second unleashed the swank. A cool and swinging R&B jam that sizzled into a blaze of shimmying and shaking of rumps, Karl took the baton and went for it, just slaying “Fallin'” with sulty bed-ready melodies and screaming climaxes.

Screaming Headless Torsos, yes all of them, joined KDTU for the first four songs of the second set at the packed and hot as Africa, which was appropriate as ten men crowded the TLA stage. Two drummers, two percussionists, two guitarists, KD and Littlefield, Veith and SHT’s singer. Denson dedicated “Elephants are Big As Hell” to the late Fela Kuti. The ensemble dipped into the hypnotic trance afrobeat the warrior and freedom fighter is revered for. This went through waves and lulls, though never frenetic nor boring, just a meditiative banger that was one of four songs played all three nights.

The ten men also rocked out a sexy but unusually thick and powerful “Groove On” with the ten man factor and SHT’s dreaded Cory Glover-like vocalist bordered on Capleton with his “bumbaclotts” and animated gyrations. SHT’s left the stage to a raucous applause and I was so sweaty I could not grip a pen to write their names down… KDTU busted a fierce “Spanish Castle Magic” and then immediately “Dance Lesson #2” off the album of the same name. They passed the jam around the circle, again Dillon, whom KD referred to as Mike D., dazzling with vibraphone prowess, like a Milt Jackson playing Slayer solos. Hardcore.

They quickly encored with “Check Out Your Mind,” the most psychedelic and ominous song they play. The demented descending bassline coupled with the eeire Rhodes and guitar tones make a foreboding intro and allow KD to lead his team into neverworlds with unholy boom-bap, mellowing out to a silence as each member left the stage one by one.

This show was essentially the blueprint for the run. The decidedly smaller catalogue chosed for the tour was in effect to ease the transition of the new drummer into the team’s way of doing things, but well into the tour, the bible thumping skin basher had the breakbeats on lock.

Los Amigos Invisables opened the College Music Journal sponsored show at B.B. King’s Blues Club the following evening. I caught a few songs of the openers, and instrumentally; their organic latin house was quite smooth and unique in its care-free vibe and minimilist bounce. However, their horrendous vocal stylings were in need of Menudo makeover, nah mean?

With the excitement of the Manhattan crowd at full throttle and the swanked-out club packed to the gills, KDTU rolled onstage together at 10pm, and immediatly busted the Ron Levy penned “Like Like Dope” off Dance Lesson #2. With the slow organ grind leading the way, David Veith instantly made it known that this first set belonged to him, and proceeded to herk and jerk away on the Hammnond all night, particularly on the opener, “Perfect Score,” “Make it a Cosmopolitan,” and layed smooth Rhodes licks underneath a crooning Karl on “Satisfied.”

The inimitable EJ Rodriguez replaced Mike D. on percussion in NYC, probably because he lives in Brooklyn and is KD’s fave hand drummer, and produced a decidedly more controlled and flavorful compliment next to Zak. The second set again opened with “Elephants,” and also included a blazing “Rise and Shine.” The set also delivered slamming breakbeat workouts in the form of “Front Money” and “The Bridge.” New trumpeter Littlefield really shone on the Miles Davis classic “Jan Jan,” played fairly loyal to the original composition.

The highlights of innumerable amount climaxes in the second ninety minutes came during the lust-filled “Can You Feel It.” Karl’s sultry flute leads set the tone for all the model-type ladies to find the need to come towards the front of the stage, forget themselves for a while and cut rugs in determined fashion. We belted along with the band “Tomorrow stay away, tonight we’re gonna play, The music… the music… the music.. its good for your soul!” KD then looked back at Zak and they just RIPPED the Greyboy Allstars chesnnut “Tenor Man.” I can remember when I first saw GBA do this song with Melvin Sparks many moons ago when I was a freshman at Club Toast in Burlington. Through this Kark spotlight, I reflected on how long he has come and the audience he has scooped up along the way. He truly deserves all of the newfound attention.

The encore combo of “Flute Down” and “Who Are You,” yet another dreamy boogaloo groove tandem sent us home or wherever we were headed with skip in our step and quivering behinds.

Saturday at the 9:30 Club in DC, there was an aura of New Orleans in the air, as the show did not start until nearly 1am. The lines outside the club to get in were exacerbated by the EXTREMELY nearby Howard University homecoming celebration, complete with serious whips rolling on serious rims snarling traffic, and bangin’ beats out they trunk. I’m talkin a Puff video, Benzs, Tahoes, Navigators, Escalades. This was the vibe walking into the joint, and a general swanky energy was present throughout the evening.

KDTU opened with “Thirty Two” again, yet an nearly identical yet still lovely rendition of the song. “Spanish Castle Magic” enabled Brian Jordan to break free like running back in the open field with soaring Hendrix wails and feedback. Through the last year, I have watched and listened to Jordan inject such new life into this timeless scorcher, all the while honing his own ripping prowess inside the boundaries of this tune. DC was really Brian’s night, repeatedly taking high emotion solos and garnering raucous ovations after each one. KDTU displayed the pass the jam thing throughout the show, which was much shorter than the past two despite its late start.

“Whip Whop” was explained by KD as the sound made when “yo mama slaps you upside the head.” A standard four to the floor funk workout, followed by another “Satisfied.” The show just seems like one big blur of feather boas, saxes screaming, wailing guitars and burly funk. It is always funky when it comes to KDTU, but they just dropped funk beats all evening, songs intermitten with the type of thing DJ Premier lifts for all those head noddin’ Gangstarr samples.

The second set was another groove marathon, but a low down dirty rave in that it did not stop pulsating until the gig was done. Just relentless, driving tunes that did not let up. Another “Elephants” to open, Mike D took the lead with hypnotic vibraphone playing that renewed interest despite seeing the long, minimalist song three nights in a row. In true James Brown fashion, the new Godfather moved over to the organ during the extended jam.

“Groove On” was a kalidescope of swank, just damn near lambada dancing going down in the front; the club was a mess of noses and butts bumping, and jaws and torsos grinding. “Dance Lesson #2” finished the set with Karl taking the reins and reminding us all why his name is on the marquee. With blazing tenor solos and stop on a dime signals, he really has become a incredible bandleader; it shone on this set closer.

A sweet (and again sexy!) “Who Are You” closed out this mammoth KD East Coast invasion. The audience was ready and howling for more as the clock struck 3am and the band retired for good. A reminder as we exited that this certainly was not New Orleans, although a good commercial for it.

These days, I spread myself thin (in terms of seeing music) trying to be diverse and broad in my spectrum of listening and going to shows. Yet the KDTU experience fufills nearly every aspect of what I love: stepping into a room and leaving your life at the door and being entertained and entranced by music and its audience. I like to think I get off at most shows I see, but I seldom become that wide-eyed boy again, removed from the critical persepective. KDTU strips me of that pretentiousness every time, and I walk out dripping wet with sweat, spiritually and soulfully renewed.