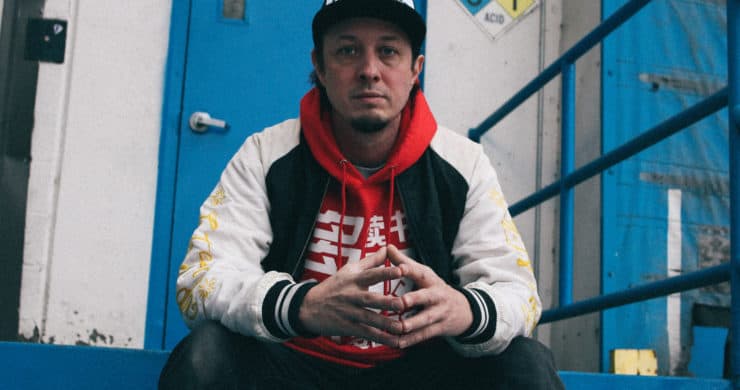 Features Promotional
June 2, 2018June 27, 2018 B.Getz adam deitch, break science, lettuce
Few cats in the music game today work harder than Adam Deitch. The drummer extraordinaire has earned that reputation from his tireless work ethic and non-stop gigging in rooms of all sizes for more than two decades. Deitch is forever on the go, touring the world and prolifically releasing music with a variety of projects, including his two main endeavors: psychedelic funk giants, Lettuce, and his electro-soul duo, Break Science. During the legendary New Orleans Jazz Fest this year, Deitch appeared in a half-dozen different combinations over ten days, including Rage!Fest—the high-profile, second-weekend, two-set threauxdown with his brothers in Lettuce. When he is not putting energy into those two gigs, Adam is fine-tuning his production skills in both the electronic and hip-hop arenas. We already know that Deitch Beats Don’t Quit, but it’s a wonder when the Boy Wonder ever sleeps?As such, after yet another mammoth showing in New Orleans, it was difficult to track down the venerable skinsman for an interview, but the people demand an update on all things Deitch. We wanted to ask him about Lettuce’s big return to the ATL as part of the Candler Park Music Festival in early June. Adam was kind enough to make time to give Live For Live Music’s B.Getz the scoop on the Jazz Fest afterglow, Lettuce festival sets, and why Outkast is still the most important hip-hop artist to come from Atlanta. Then, lucky for us, the LettuceFunk drummer couldn’t resist teasing us with some details on the band’s new album—the long-awaited follow-up to 2015’s Crush.

Live For Live Music: Fresh off of another impressive showing in NOLA during Jazz Fest. The most wonderful time of the year! What are some reflections and impressions from Lettuce’s Rage!Fest, and Jazz Fest in general?

Adam Deitch: Rage!Fest was really special this year. Just having the K9 Brass Band come in from Booker T. Washington High School—incredible! It completely changed the dynamic of our show and made it unforgettable. It was their first real performance like that. It was just great and very rewarding to see how energized the kids were and how our audience embraced them. I’m glad we got to bring those kids out, and they crushed. Great experience, and a very special moment for Lettuce.

Jazz Fest as a whole was completely out of this world, again—just like every year—but especially this year. NOLA, man. It’s another universe, another planet, and it’s the greatest place on Earth for us, for those few weeks. I cannot say enough about Jazz Fest and New Orleans in general. It’s changed my life; it changes my life every year. Makes me celebrate another year around the sun.

L4LM: Coming off Jazz Fest, do you notice that the band plays any tighter, anything different, maybe more adventurous?

AD: In past years, Lettuce Jazz Fest shows have sometimes had a tendency to get a little sloppy. They’d get a lil’ sloppy because we play so many other shows down there outside of the band; coming from so many different projects back to Lettuce in the middle of Jazz Fest can result in some sloppiness. But this year, we really placed all of our focus on the one show at Rage!Fest, and I think it’s so much better for the band and for the fans. As we mature as a band and as human beings, we just know how to pace ourselves better and better, to get to the gig feeling right, feeling good, and each of us is totally ready to do it.

When you love the music that comes out of a city like New Orleans so much, it can be overwhelming at times to play there. But it’s important to relax and do your best to pay homage to the greats that have inspired you.  Sometimes we put a lot a lot of pressure on ourselves because it’s New Orleans… We have got to be on point, because we are around The Meters and Dumpstaphunk and so many of the greats out of that city. But as we mature, we have learned that you can’t worry about that. You just got to stay relaxed, have the right vibe, and then go out there and do what you do. I think this year we finally did that.

L4LM: Rage!Fest was definitely a fantastic show. Now, we are moving into summer festival season, and I want to talk a little bit about festival sets. How do you approach playing for a festival that might not be your own audience? How does that compare to playing in a nightclub or a theater to a totally Lettuce crowd?

AD: Well, when it comes to what we play, it really depends on the time of day that the festival puts you on. If they put you on the main stage at 5 p.m., it’s going to end up changing what we choose to play. Our dreamier material and more psychedelic stuff—like, say, a “Purple Cabbage” or a “Gang Ten”—those kinds of songs we prefer to play at night and after dark, when the music works with the light show, and we take people on a ride. So if we are playing a sunset or daytime set, we don’t feel like those kinds of songs are our best in that situation. On day sets at festivals, we have our daytime songs—uptempo jams where we find the funk and throw it down hard, songs that are really going to get people excited, get them up, engaged, and moving. We want to make you dance, which has always been our thing. So, yeah, we kind of change the setlist at festivals based on the time of day and the vibe.

L4LM: Sometimes you play the same festival, both daytime and at night, and they will be two completely different sets.

AD: Yeah man, definitely. Certain tunes of ours stand out when the sun goes down, and others are better for when we go on during the day. Like anything, it’s all balance!

L4LM: One festival that fans in the Southeast have been clamoring about is Candler Park Music Festival, which takes place in the Atlanta area. Lettuce is headlining, along with Gov’t Mule.

AD: Now, that’s a combo. Gov’t Mule is a great band! Those guys are pros. Nigel [Hall] has worked with Warren [Haynes] before. And I love Atlanta. It’s a big hip-hop city!

L4LM: Obviously, you are one of the biggest hip-hop heads I know. We both know that ATL has been running hip-hop since around the turn of the millennium, and I know you are from New York so you don’t like to hear it… but it’s true. Where are you at on Atlanta hip-hop in 2018?

AD: I’m universal now. Yeah, I grew up on that classic NYC stuff, but I have embraced all of the eras, all of all the styles, coming from all the regions. I’ve been to a lot of places, picked up on things all over, so I’m into every region these days.

L4LM: What is your go-to with ATL hip-hop?

AD: I’ve got to go with Outkast. I know it’s an easy answer, but I feel like what they did lyrically, as well as with those Dungeon beats, they were ahead of their time and kind of still are. I was real into Big Boi as an emcee, and I think his solo stuff is incredible too. They were reppin’ the A real hard… Yep, going to have to go with Outkast.

L4LM: During this winter’s Beyond the Clouds tour, I heard Lettuce drop into the unmistakable groove of Outkast’s “So Fresh So Clean” a couple times, so I would think that would come out.

AD: Oh, yeah. That can happen at any time. Any song!

L4LM: I’ve noticed you guys started to tease the new Lettuce record. I saw a post on Zoid’s Instagram from Sonic Ranch Studios with you rocking the Mellotron! I see that the one-and-only Russ Elevado is on the boards. Please tell the people what’s in the pipeline!

Russ Elevado is a genius with mixing. He’s done everything from D’Angelo’s Voodoo to Roy Hargrove’s RH Factor—he’s worked with Alicia Keys. Russ has done so much stuff in the soul, funk, hip-hop worlds. Russ worked with J Dilla. He’s worked with Talib [Kweli], the list goes on.  He’s bringing a beefiness to our sound that we are really excited about. He’s got a thickness to the bass and drums, he has a touch that is like… our real sound—he really brings out our true sound. Remember, there’s no plug-ins; it’s all analog. It’s very real—every effect and sound comes from an analog box or piece of equipment that he brought. There’s no computers, no digitized stuff; it’s an organic record. I’m really excited for people to hear it. I feel like This is how the band should sound. 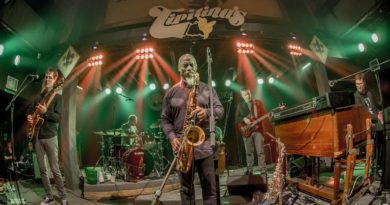