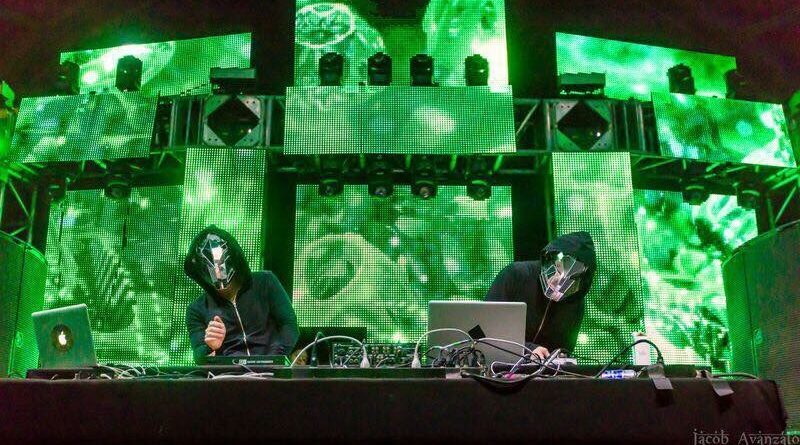 Features
July 27, 2017February 27, 2018 B.Getz
2017 is only half-over, yet it’s already been monumental for Oakland’s phenomenal future muzik merchants, Dimond Saints. an-ten-nae and Releece—the two artists behind Dimond Saints—released their long-awaited, critically acclaimed LP, Prism in the Dark, in January, then followed it up with a haunting companion EP, Shadows, in the spring. After unveiling tons of new material at Raindance’s annual Chinese New Year in San Francisco, the duo has ridden that momentum into festival season, delivering fiery sets at Lightning in a Bottle, Electric Forest, Enchanted Forest Gathering, and more. The Saints have an East Coast throwdown later this month at Farmfest in New Jersey ahead of a high-profile engagement slated for the main stage at Oregon Eclipse in August.https://youtu.be/MFGnJ418Fog

Today, Live For Live Music is proud to premiere Dimond Saints‘ new music video and a free download of their bombastic remix of Kendrick Lamar’s “DNA.” The track is an-ten-nae and Releece’s colossal re-imagining of Kendrick’s Lamar’s smash “DNA”, from the Los Angeles rapper’s recently released opus DAMN. The demonic duo reaches deep into the heart of darkness to uncork a cannon blast of conscious anthem trap. Neck-snapping drums march beneath K-Dot’s potent prophecies, while the sparse synths and samples on the track infuse instrumental flourishes and primordial percussion with surgical precision.

The video for Dimond Saints’ “DNA” remix was directed by Galen Oakes. Filmed live at Lightning in a Bottle 2017 in Bradley, California, the video features clips of Dimond Saints’ set at The DoLab‘s Thunder Stage and captures the two at their absolute zenith. For this particular set, an-ten-nae and Releece were joined by Matt Silberman on sax and MIDI flute and C.L. Behrens on bass trombone, as well as by frequent collaborator and ethereal vocalist Yaarrohs. Dimond Saints debuted their “DNA” remix late into their LIB set, detonating a thunderclap that reverberated into the night and sent the assembled masses into a frenzy. You can read more about their fantastic Thunder Stage set in L4LM’s LIB 2017 wrap-up. Check out Dimond Saints’ latest music video below, and click here to download Dimond Saints’ Kendrick Lamar remix.