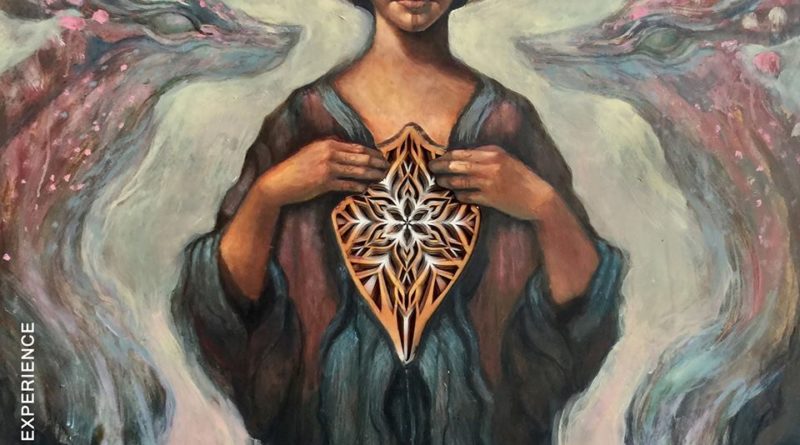 Reviews
February 14, 2017March 1, 2018 B.Getz
Returning with Broken Open, his sixth full length album as a solo artist, is The Human Experience. Appropriately delivered to the people on Valentine’s Day, it is a an age old story, of a man once a boy, and his journey inward; in his words the document “examines the depths of the most difficult of human emotions.”  Being in love, letting go of love, and learning to love oneself, these themes establish an ornate fabric that runs throughout the record, as David Blockexplores the annals deep within his own heart. This record is the first official release from Block’s Slow Down collective.

On Broken Open, the title track is an amalgam for this entire expedition; as Block marries the best of his patented electronic flourishes to a newfound penchant for lush, minimalist instrumentation. Ably assisted by Michael Travis (String Cheese Incident), “Broken Open” is the first of two songs in tandem with vocalist Kat Factor. The entire record is fueled by the masterful contributions of several female singers, each lending their own vibe and energy to Block’s sensual serenades. “Traveling Blues” is slinky reggae propelled by a magnificent trombone lead courtesy of Mal Webb. A fan-freaking-tabulous rewiring of The Police’s “Walking on the Moon,” has been a staple of his live sets in recent months. This meditative dose of unadulterated eroticism is bouyed by the supple vocal tones of Bee Born, and a smooth sixteen bars from Bay Area underground hip-hop legend The Grouch. As the sojourn continues, British Columbia shaman-in-shwirl Goopsteppa teams with Kat Factor for an emotional dirge; “Slips Away” is a somber, soothing piece that lives somewhere betwixt The Sugarcubes-era Bjork and Tracey Thorn. Goop’s whistling organs and understated drum beats are the perfect foil for Kat’s IT factor. On the soaring, juicy “Amber Glow,” KR3TURE and Heather Christie (Feral Fauna) manifest some of the most heart-filling tones in David Block’s already storied career.  Here, Block has nearly perfected his dalliance between organic and electronic, as trap-kit percussion and synths are propelled by a digitized, pulsing bass groove atop the floor toms. Electronic ornamentation embellishes this anthem, as it builds to a crescendo with Christie’s mesmerizing vocals and tasteful sax from KR3TURE. This massive slab is followed by David’s reconnection with Kalibri, on a unique cover/remake of Alicia’s Keys first massive hit “Fallin.”

Given the tenor of the album, “Two Tigers” at first feels overwhelming, when the big bass and frenetic pace awakens the listener from their snuggly cocoon. Late in the exploration, we arrive at “La Maricuya”, its acoustic guitars and Spanish verse from Block bely the song’s true intentions, passion-flower seduction . Propelled by Phutureprimitive-esque synth builds and a helping hand from bass goddess ill-Esha, “La Maricuya” is vintage The Human Experience, yet like the album as a whole, it sounds nothing like any material he has previously released. First single “Unharnessed” is four years old, as Block was just waiting for the perfect songbook to place it. A slow, deep, and tear-jerking opus, Leah Song of Rising Appalachia channels the soul, and those visions emanate throughout an exquisite duet with her longtime friend.

Stream the album in full, here.

“Broken Open explores the full spectrum of love; Birthing from innocence to heartbreak to love in the other to breaking free to finding love in oneself.” The Human Experience- David Block